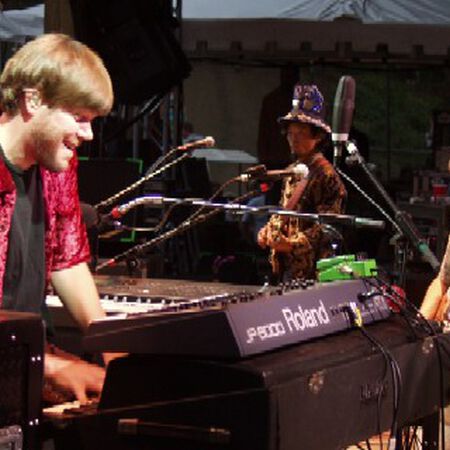 "Awesome Show, great atmosphere and vibe (the indian thing). Texas Town really kicked ass with that different change in the middle that lead into A great jam, I was very Surprised and it was Strong, they didnt do it the next time they played it but I hope they do it again in texas at acl or stubbs. Kyle was all over this show, it was funny after rollin sweet babys arms bill did his Ole` and kyle responded with Odole` which was appropriate since we were just miles from the mexican border.(Kyle is Funny and smart) new pollution was cool, vocals a little loud though. JELLYFISH was 1 to remember Like a tadpole LOL.....Lonly Tadpole swimmin around. GDTRFB was Great I was in the friont by mike and the only bummer was a few people were screaming GDTRFB, They could not control their emotions and it was irritaing to me mike and bob and everyone else around who were trying to concentrate to make it special. Keep it cool people and listen deeply. Thank you "

"Great show purple with silver sparkles in the sky around the heavens, indians vibes incubated our souls."

"great concert!!! MLT was incredible and kyle was on fire!!!! Billy sure seemed to be having a lot of fun up there. Oh yeah and the drum solo-it was awesome!!"

"Wow!!!! I thought San Diego might be a breather for the bands, but this night rivals Pozo. Wish I was going on!"