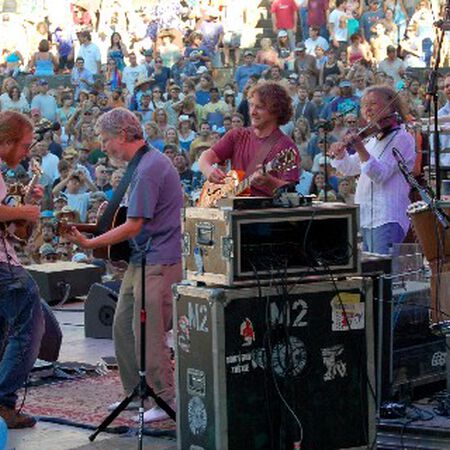 Will The Circle Be Unbroken? 561

"I have seen 30+ incidents over the years...this was my last one. I chose it for venue, friends, and RRE...i knew it would be a hoedown. This show was an absolutely fabulous event. The opening "Shine" took me back to `00 Telluride. First set was the classic Cheese that I loved and missed. Second set was a frenzy of guests, new songs, and covers. The encore, though, I`ll never forget. With 12 people onstage for what Kang referred to as a "cluster pluck", they broke into a beautiful rendition of "Will the Circle be Unbroken". I turned to my wife (already starting to get teary-eyed) and told her I hoped they were done, because I didn`t think they could have ended it any better for me. The boys huddled off-stage to a relentless applause and came back out for the most special, emotional "Smile" possible. It was as if they were speaking directly to us, and we all got it. I bawled my head off, and it felt so good. As I looked around, I realized that I wasn`t alone. "Smile" has always been my favorite song. This could not have been a more perfect way to end a decade of good times and community. If this show wasn`t so perfect, I would have been at Red Rocks. No need...this was the closure I needed. Thanx for all the moments, boys. You have changed my life for the better. Good luck in your pursuits."

"I was not at this show but had to buy the download asap, the setlist made this a must. I got myself prepared for what I was about to embark on, and that included extra-curriculum activities as well as ice cold beer, etc. So how do they start this Sunday Afternoon show. Oh, I see, a wicked Shine. My unofficial anthem. And no, they aren`t slipping at all. Full throttle. Oh wow, pretty intense first song. Oh excuse me now, we are going to slide a "Little Hands" in right here. No way. Huge!!! It was to be an evening to remember. I harkened back to the days of 2000. My first gem, the Emerson Theatre in March of 2000. those John Anson Ford Amphitheatre treats no one knows about, but should have been there. The classic 2001 run at the Wiltern 3/2-3/01 and Jerry`s Birthday at the Los Angeles Greek Theatre Aug. 1st, 2001 when they broke out a miraculous Eyes of the World. If I remember correctly, the Rivertrance is arguably up there with some others. The Fox shows in Atlanta, Thanksgiving or otherwise, the Thomas Wolfe Shows in Asheville, Richmond, VA Columbus, OH, Bonnaroo. Vegoose, Portland NYE Shows, the Beacon, this show has got to be a top 3, PERIOD!!! If not the best. It was a superb show going back to a setlist represntative of their roots with a fullness of sound and controlled reaches which brought together an energy obviously heard as the crowd reacts to all the moves SCI played during this show. It was in one word and one fans opinion...brilliant! Welcome back to the cheese I once heard when I became inaugarated(sp?) into the world of the Cheese back on that early March day in 2000 at the Emerson Theatre. They are back, and they are rockin`. With guest appearance by Railroad Earth in the first set and Hot Buttered Rum String Band in the second set, it was agreat night of music. With the all dance for the first two songs of the encore where a couple of classics were broken out...Whiskey Before Breakfast, Will the Circle Be Unbroken and of course the salute to a time gone by, Smile, any true Cheese fan, from yesterday to today rocked with a band bringing it all, no stops, and played with their hearts and blew Berkley back into the 60`s with the energy the Cheese brought tonight. I recommend all to olisten to this show as it is truly a classic, at least, in this fans eyes. And I have a seen a few. Maybe it was the not attending, but I will say this, if I feel like this from a recording, I can only imagine what it was to be truly in attendance. My losss. But two words...RED ROCKS! Baby!!!! Wooooooooooo."

"I knew coming into this weekend this was gonna be the day... it was a sunday and it blew saturday out of the water... don`t get me wrong saturday was great but the vibe... the smiles on this beautiful saturday afternoon were just amazing... hot butter...earth... the CHEESE... probably the best cheese show I have seen in a year or two... download this!!!!!"

"killer shows. I can`t believe the band would let nershi`s leaving, make them quit. Nershi, I love you, but these guys have too much talent to stop playing as SCI. Have fun!"

"An absoluteley magical show. At the end of the set I sat up in the grass and realized I was sitting next to Mike Kang`s sister! She shed tears and I told her how wonderful the music was and how everyone was so happy. I thought so much about the earth and our place in it. Remember folks: THERE ARE NO FRIENDS; ONLY FAMILY. I`ve never felt so blessed in my life. Truly these men are bhodisatvas. Here to guide us home. Thank you, thank you so much. From the bottom of my heart. I cried all through Smile. I called my grandma and aunt to thank them for all they had done for me in my lonely motherless childhood (at one point I thought my estranged mother would be there "You turn around and you look at me, and I can see you smile" and we would be reunited. I turned around only to find the trees. In a way though I was reunited with my Mother.) We cried. I thanked everyone I saw. I thank you all for the love you showed that day. Ive never felt so close to the divinity we all share. What a day that was indeed. An endless day that will last forever. Thank you so much."