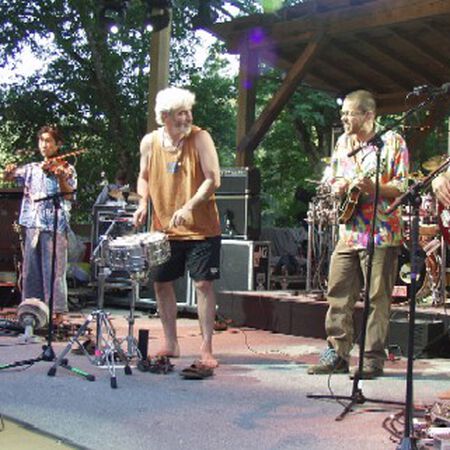 "well look at who all is over here :) I can`t wait to hear these shows because I wasn`t there and I know they`ll be hot. it`s been about 8 months since my last incident and I`m feeling the music they`re playing this year. can`t wait"

"i`d have to say that horning`s was the best incident i`ve ever had. keller (who i just saw for the first time ever) is one of my new musical heros. wonderful lineup, talented artists, and wonderful people. certainly the best birdland i`ve ever experienced. do yourself a favor and buy the whole horning`s run from this year."

"I love how listening to this show can ALMOST transport me back to horning`s hideout.sunday night was one of the most high energy cheese shows i`ve ever been to,and as we all know,they feed off all of our circular energy.it sure came into play that night I look at this show as if it were 4 sets: set 1 split into two,before and after the acoustic part and set 2 split into two,before and after the mini keller incident.The show started out nice with some intimate acoustic songs and the LFB started out a bit different as Kang was having some troubles with his equipment,which is why the intro is a bit longer.the boys made up for it and rocked this LFB hard. next we got one of keith`s new songs,which was kinda funky.I dug it. After that,we got a little reminder that it was father`s day as keith and billy`s little girls came out for mouna bowa and took center stage with their twirlers.so awesome! Next we were treated to an awesome Got What He Wanted with keith layin his rhythms down hard.great keith action on this one. Next we got a beautiful Little Hands > Birdland.My friend was going nuts for his first little hands then when i heard the birdland intro,i started going absolutely nuts.it started out kinda mellow but lit up and climaxed big. setbreak was a bit longer so i rested up for another big set.i was wiped out after that monster 9 song first set. Set 2 started out just right with the huge group hug which got everyone into celebration of life mode. i have to say,this 2nd set was more than just a set.it seemed more like an apocalyptic party. the mini keller incident was great and seemed kinda reminscent of the nye 02 opening set. Vacate was super reggaed out and franklin`s tower was huge.it had everyone giving eachother hugs and huge smiles.after that we got alligator alley which i was personally praying for all night.then jamie janover came out and highlighted breathe,which was exactly what i needed to do at that point. Once keller left,i heard those familiar notes and thought `hey,didn`t they play this last night?` but as they led into valley,i couldn`t care less if i saw it the night before.this valley was huge,as was way back home which came next.Next we were treated to betray the dark,which i think is one of the best new songs they have come up with.next they say they have the hamsa lila saxaphone player coming out and we got a super funked out jellyfish.OOH,GOO ON HER SHOE! this atom bomb erupted the crowd into a frenzy. led out by restless wind,but i knew they still had some juice and they came back out to close out the night with some marley.perfect way to end the weekend. we all left hungry for more but the cheese had given us such a precious gift by allowing us to share in the magic that had transpired.thank you to everyone who was there.see you all next year.."