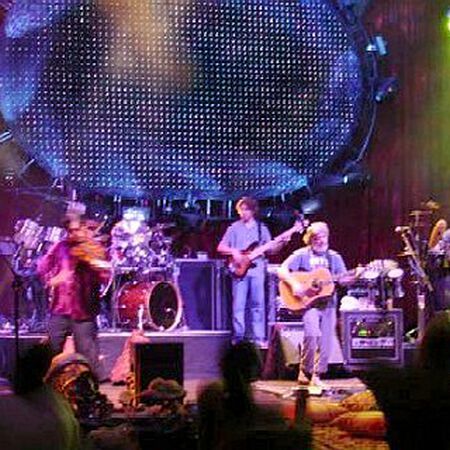 "Hey Yowzah, I just wanted to let you know that Bloomington, Indiana is not in the middle of nowheresville. If you knew anything about music and the so-called jamband scene, you would know about the history of Bloomington and Nashville, Indiana. Jerry Garcia (who is he?) got his start with the godfather of bluegrass, a one Bill Monroe (do you know him?), in Nashville. (Not to mention Ralph Stanley, Rikki Skaggs, Bela Fleck, Edgar Meyer and the list goes on and on... Umphreys even got their start four hours north of here in SOUTH BEND, Indiana, not Chi-town...) If you actually took the time to read the insert in the CD from Old and In the Way it talks all about the rich bluegrass tradition of southern appalachia....dont ever say its a nowhere town again...it has more music tradition than most cities ever will...i would be inclined to say that with the exception of New York, LA and Austin, TX, Bloomington is the next big mecca of music in the U.S..... if you don`t know what mecca means please contact me and I will explain to your naive self....thanks.... "

"Wow - The Cheese really outdid themselves on this night in nowheresville. So many highlightgs I have not the time to mention them all. What I must inform people of is the What I KNow and the Black and White and the Shantytown. All 3 of these tunes were enough to knock me out. I`m really starting to dig What I Know. It`s such a great song I hope they play it a bunch in the coming tours. And the blakc Clouds was pretty sick aswell. Thanks to dave for the candy in the lotz and to cheese for the best show I`ve seen this year. Check it - "

"All I can say is WOW!! Just downloaded this show and I must say I was impressed. My first incident and not my last for sure. First set was strong but What I Know took me to new heights. I mean this song was insane from start to finish. The second set highlights included Rollover and Black and White. I love those songs and I was thrilled to hear such great versions at my first show. Check out the SICK funky bass in Rollover it`s intense. The shantytown was a great closer. As far as the encore is conserned, well, Jason is simply on fire. that percussion jam was worth the price of admission. Most drum jams get a little old on disc but this one sounds just as good as it did live. To sum things up, great band, great night, great venue, great show, and for ten dollars how can you not download this show?!? Cheese please come back to IU soon! Peace "

"This was a crazy show. It was so cool seeing the Cheese at my school. I saw them for the first time the night before and I had a good time, but this show topped it by a million. The Rollover was the killer. That percussion dude they have had lately is pretty amazing, I`d love to see him stay with the band. If you`re looking for a show to download, look no further than this phatty show from IU! Peeeeeeeeeace"

"Initially I was already excited about seeing String Cheese live for the first time. Now after seeing them, I definitely express an appreciation for their talents. The show resulted in trickled sweat from me dancing constantly to every song, even the slow ones. It was truly an experience with them I will do again and again and cherish. "