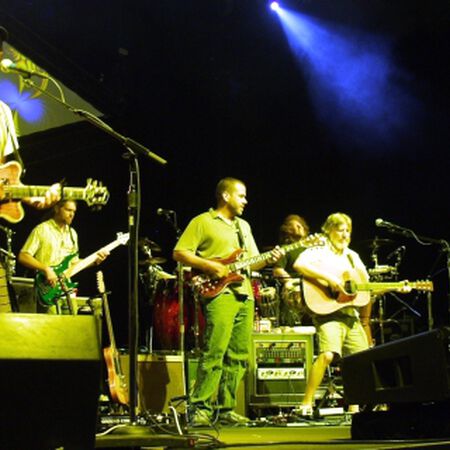 "I live right across the street from this venue, I was in reach of the park. Had lots of treats and some of the best looking tasting and feeling Purple I have ever seen. Anyway the place they played is the biggest Dog parks We have here in Washington. The lot was sweet. Just a big huge grass field where dogs are usually running. They were using this as the Parking lot. Lots of drinking smoking and dancing was going on out in the lot/ So I walked over to the show and Had a Great Time./. Oh and by the way Lookj at this Fucking set List., PERFECT/ Loving Cheese In Washington. even though were not good enough for them to come to Seattle"

"Awesome show and great way to kick off the run. Scott Law is always a huge welcome on stage. Many people would have to say that the big compromise is slow and doesn`t get us moving. But the song and lyrics move me in a different way for sure. I mean the reason the cheese are my favorite band to go see live is because of the variety of musical styles they can play any night. Whether it be rockin bluegrass, jazz, funk, folk, trance pschedlia, latin and whatever else i am missing I LOVE it all. Soaking it up, I anticipated the song for the compromise of not playing hornings. It made me appreciate the scene there and all the people I love at the shows. The shine was super sick and the shantytown is probably one of the sickest ever. Thank you String Cheese and everyone who attended the shows for a spectacular week of fun and music."

"Redmond Night 1 Review I was real excited to kick off CHEESE tour after my long ass flight from Baltimore. We arrived at the venue real early only to be blown away by the awesome campground and amazing scene that awaited us. The band came on around 7 and opened up with a pretty standard version of Search which is always good to hear. I was pumped to finally hear a version without Drums in the middle and felt decently satisfied. A twelve minute Missing Me was solid but not a real highlight. Boo Boo’s was solid and nice to here. The overall energy in the venue was a little low at this time which I will explain later. The Solution, the new Mike Kang tune wasn’t that great I would have preferred Tamba but you can’t get everything. Birdland-> Flying North Jam-> Birdland resonated as a gigantic first set highlight. A standard but rocking Rhythm of the Road-> Rain closed the set. I left the venue to grab parking lot booze and more bomb hashish and just mad it in for the second set. One Step Closer was pretty long and ran around ten minutes and was a nice jam to hear. Is What It Is sucked the life out of me, Perhaps I’ve heard the song to many times, or perhaps it’s the slowed down ending I don’t like whatever it was this number did nothing for me. Sirens-> Eye Know Why was unreal that really got me moving with some dark funk Kang was tooling around a lot with some experimental sounds that I really liked. Out came Scott Law after that, I had huge hopes for him after last years Horning’s Hideout Shantytown, but was crushed when the band went into the Big Compromise, Law’s playing was stellar but left me wanting a better song selection. With the next number we attained that, Shine, came roaring out of the ashes and this version can certainly lay its claim as the greatest ever. This was clearly the highlight of the show for me and I nearly lost it taking in the gorgeous scenery during the unreal apex of the jam. After Shine, came the most tranced out version of Shantytown ever. Mike Kang had his laptop set up and was making the most funked out clubbed out beats you can imagine. Another massive highlight for me. The climax of the jam was sooooo big for me. I Know You Rider was standard but sick, with a nice shout out to Jerry on his birthday, NO encore however left me massively disappointed. Out of the five shows I same on tour this was the forth best. I expected big things from night 2. The reason for the lack of intensity at this show was revealed the next night during jellyfish when Billy Nershi revealed he had drank too much Jaeger the night before and was mad blasted. "

"Let me start by saying I LOVE CHEESE!!!! About three years ago a friend introduced me and I`m never going back. Up until the August 1st Marymoor show, all of my incidents had been seen in Colorado. This was a fantastic start to the move back to Washington. The atmosphere was great, the venue is beautiful and the sound and intimacy make me want to see another show there very soon. Cheese started with Searchin`, ended with I know you Rider and kept me dancing at all points in between. Chriss Berry and Scott Law were both pleasant mellow Surprises and Shantytown made me hug my neighbor. I look forward to seeing Cheese again and I`m very impressed to know they put the same energy into all shows! "

"I agree, great show and song selection. ROTR was HOT! and it was nice to hear a great birdland, I really enjoyed Kyle`s solo in that one with the way he made his keyboards "talk." I didn`t really know what to expect at these shows since I had never been to Marymore for a show before AND I hadn`t seen the cheese since 2003. I love how their sound has progressed in the funk department, with some good spacey and dark jams at times. I thought second set was one of the better sets I`ve seen. IIWII was a throwback to the days when I used to see them a lot, but the real magic was in the jams and segues, I thought. Marymore was a great venue and the sheriffs were really cool and did not harass anyone. I would definately recommend downloading this show, particularly for the second set! "