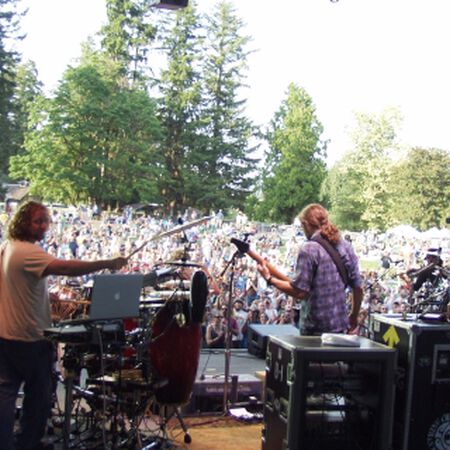 Born On The Wrong Planet 783

"The second set is one continous jam. Looking Glass is big, with Kang carrying the song. I`m glad their developing this one. Who doesn`t like to hear Pirates? BOTWP is funky. Valley of the Jig starts with an Irish beat, moves to a transy groove, and has a rocking ending. The jam at the end of Jellyfish puts a smile on my face, and begins after they practically bring the song to a stop, It`s Classic Cheese. Awesome second set. This is a definite download. "

"My 50th show!!! I wanted to see Suntan more than anything and they opened with it! Show, energy, and the atmosphere was in full effect. A definite 10!"

"As usual, SCI delivered an awesome show. BTW Andrew, seeing two sets of shows that are at most an 8 hour drive from each other, and taking drugs because you think it makes you cool, is not "being on tour.""

"Andrew, you are an idiot."

"Redmond Night 2 Review After a decidedly lackluster night 1 the boys sure brought the heat tonight. It all started with the first Suntan in 2 years which I enjoyed the beginning from the parking lot much to the chagrin of Russell who couldn’t understand why people need booze in the venue. This version however was soooo sick and we saw the climax as we entered Marymoor Park. This quickly segued into Got What He Wanted which left the lawn funking with delight. Whiskey Before Breakfast was a nice first for me I really enjoyed, that jam rolled into Wake UP another GIGANTIC bust out that sent me dancing across the stars. The songs words were so inspiring and took me to a huge peak. Pack It Up, Wheel Hoss and Black and White were pretty standard jams with a nice peak at the end of Black and White that lead inexplicably to a raucous Ramblin Man to close set 1. This kind of heat was the exact reason I came to see west coast CHEESE. As I returned again from the lot, arms full of St. Pauly girls and was stunned to hear the opening of Looking Glass to start the second set this was a sick long jam the lead to the climax of the show for me. At first I though the jam might be Latinissmo of Yo Se, but NO it was PIRATES fucking PIRATES what a bust out, I went wild with excitement, and unfortunately Russell with his huge aura of cheese headiness didn’t even recognize this monumental jam. The 45th of November couldn’t have come at a better time as I immediately headed for the bathroom. I preferred this song a lot more with the slow piano beginning I hear @ MSG on the NYE tour ’05 I feel this song is where Kyle should shine and I dislike the newer arraignment I saw at Hampton Beach Casino and here. Born on the Wrong Planet was sick and segued nicely into Valley of the Jig, which I mistook for Rivertrance initially. After Valley of the Jig came a HUGE JELLYFISH, My first JELLYFISH in over ten shows what a huge fucking highlight, Billy informed us that Jaeger was to blame for last nights performance. After the huge climax in Jellyfish the band roared into one of the greatest Howard’s of the past 3 or 4 years. The Restless Wind encore left me screaming for more, yet this performance was nothing special. This show fucking rocked it was the Third Best IMO out of the five west coast shows. As me and Russell headed back to the hotel we could barely contain our excitement for Eugene which was fulfilled in a few short days. "