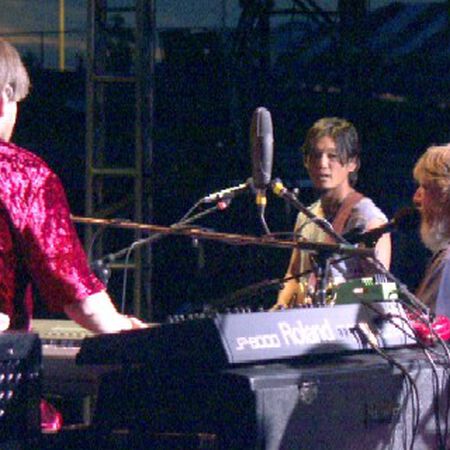 The Mighty Quinn (Quinn the Eskimo) 399

"really enjoyed CAYA opener, started off hot, a highlight had to have been little hands and a nice long rollover. overall really fun with good energy from the crowd at a venue where its kinda hard to keep everyone involved. "

"Two slammin years in a row!!!!!!! The barefeet boys really have to make a habit of rippin up summerfest. It has to be a yearly thing, wisconsin needs it, this is their kind of event,ya know. Although they played alot of the same songs as last year, it was a great show,totally worth $10 bucks for the download. The energy was insane, even with security walkin through the crowd all night. It was great hearing So Lonley with Sierens. Rollin` was the shit for an encore,anyone their will agree. Oh yeah did I mention it was a killa` show !!!!!!!!!!!!!!!!!!!!!!1"

"All in all, excellent show. A couple of thigns worth mentioning... very short show. I was extremely disappointed when they only played one set. Granted, it was a monster set, but still not what I expected. I think we got off the summerfest grounds by 10:30. Furthermore, the vibe was not the best. The security guards were complete douchbags, and the Marcus was only 1/2 full, if that. As for the actual MUSIC of Cheese, well, it was awesome cheese. Good, solid stuff. Highlights for me were definitely Little Hands and Rollover. Listening back over to the cd`s, Black Market is one of the best Cheese jams they have. I just don`t really remember it live though. Encore was short, and for me left a lot to be desired. Bottom line: I know it wasn`t Cheese`s fault, but the summerfest administration needed to take a chill pill and Cheese jam out. I mean, when the Dead played there in 2003, they played 2 sets... why not CHEESE????? Despite all I have written, it was an excellent incident and I am glad I went."

"Milwuakee was my first show after NYE, and as you can imagine I was in high anticipation to see the boyz back in full force! The only thing better than see the bare foot boys, is getting warmed up with some Dead tunes! Ther Terrapin theme throughout the set was welcomed with arms wide open, especially since this is one of my favorite Dead epics. The Dear Prudence>Birdsong was also done well, but the highlight for me was Ripple. I couldnt help think back to when Billy took lead vox on that tune at Trips farm. The boys opened up with a nice CAYA, the jam was very relaxed and Kyle was the definite leader of this one, and it was a great groove to kick off a great show. Close Your Eyes followed, but not just any old CYE, this one was packed with the new Weather Report cover: Black Market. This song has a lot of potential and I can see Cheese exploring this tune a lot more in the future. The jam out Black Market back into CYE is great and Billy takes a solid lead taking the boys into the CYE ending. Yo Se was great, and the kang solo at the end was blistering! The boys then slowed it down ( alot, not a fan of Cats), supposedly they were going to play Windy Mts according to the official setlist, but axed it for the new tune, bad play but for some reason they are giving this new (and poor) tune a lot of spins. The intro to Cats was well executed, but I just cant get into the lyrics. Seems like Billy just wanted a song with an "ohhh ohh" chorus. Quinn was fun, but not amazing, a lot of musicians on stage does not equal great music all the time/ Little hands ripped, would have been nice to have Keller stay out and take a verse like he did in Ann Arbor, but the climax was HUGE!!! And really turned the night around after a energy draining Cats. Pack it Up is a great funk tune of Kyles and I am always down for this new one. Sirens was standard, and they took it into an obvious So lonely, which is a little played out for me. Many say it was also an epic rollover, but I think it was pretty standard and the jam really didnt progress like many other rollovers do. Rollin` was a great way to cap off the night and gave me my much needed bluegrass fix. See you OTR! Jim"

"good god this was a sick show. giunn the eskimo was a shocker, but you can never go wrong with a 23 minute roll over "