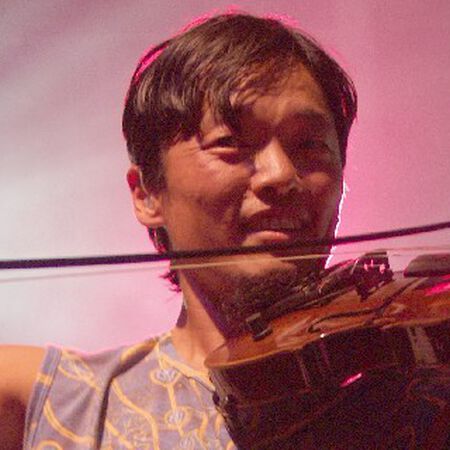 "Let me start by saying the change in venue kind of threw everything off on this, the night of my 26th incident. The show was supposed to be outside on the Delaware River, but instead was moved to the Electric Factory a cool venue to be sure, but it had neither the size or the cooling capacity for as many people as were there. The lot was nice as were the people. OK, Lets get to the show. Cheese came on around 11:30, first thing i noticed was the fact that because of the change in venue Cheese was using the house lights, boring to say the least, which did not help with the energy as the night went on. A solid Cheesy jam leading into a good Best Feeling would start the night off right segued into One Step Closer. Than a OK MLT with a Beck cover of New Pollution in the middle. This song lacked its normal intensity and the electonic beat box that Kang reverted to in the New Pollution jam left a lot to be desired, he should retire that thing asap! Then the best Joyful Sound I have heard in a while, which was probably the best song of the night. Then Rain which is a good song and it was done well. Drums thru Solution is totally standard not much going on. Black Market and its jam would represent the best newer song of the night. And while Rhythm of the Road into Rollover were pretty good the didnt have there nomally Cheese energy we all know and love. On this night it seemd as if they were satisfied going thru the motions with Billy and Kang opting for more loose less technical club rave jamming than usual. All in ALL a ok show with not to much to write home about. Anyway i still love the CHEESE hope we get our usual East Coast Fall Tour, PLEASE!"

"In response to Steve`s post below - sorry there were distractions for you. I was in the front and while it was hot I didn`t think it was too bad. And when kids passed out and got carried away there was more room for us Cheese-Vets. I have been following these guys since `97 and to watch first-hand their adaptation, evolution, devolution or whatever you want to call how the music has changed over the years is pretty cool. I thought this show was outstanding for several reasons. First off there were just enough "safe" Cheese tunes to keep casual fans in the game. Nice tease out of the opening jam and cutaway to Best Feeling. That`s when I knew the boys were throwing high heat. MLT was classic and I like how new material was sandwiched in. Best Joyful Sound in years - first couple of verses sung, last couple of verses spoken as if in conversation - way cool. Nice job Keith. I would have liked to see a couple more bluegrass jams thrown down, but I got alot of that in `97. And it seems as if the trippy jams are getting a little longer - I guess that`s so we can catch our collective breaths. As far as the closing run of I Wish, ROTR and Rollover - over the top. Nice call Keith - at least you warned us that you and the rest of the guys were about to kick our butts. Hey, just my opinion, but I think hands down, the best ROTR in many, many years. The jam starting at 5:55 made me feel like a whitewater rafter getting lifted up and tossed around a Class 5 run. The peak at 8:18 was exhausting - Kang and Kyle were freaks!!! AND THEN THEY DID IT TO US AGAIN AT 9:22. It might have been my imagination, but I thought I heard On the Road teases in the transition out of ROTR into Rollover. Oh yeah, the switch into Rollover out of Billy`s Brady Bunch Flashback Jam was so freakin` tight and fast I got whiplash. I can`t wait to see how the new material integrates into the older classic Cheese, but it looks to me like Rain may be destined for greatness. I like the edginess of New Pollution too. Thanks for a great show guys - looking forward to Seattle and Eugene in August. Be Well All!!"

"SCI definately rocked the E Factory to the ground. Although Kang`s attempt to use his little beatbox machine was rather weak, the show itself was so energetic from the first notes of Best Feeling all the way to the end of Rollover. I could have not been anymore pleased with what they played, although I did agree with the guy screaming "Play Jellyfish!!!". hopefully friday night! And to those who said cheese got lost in some jams...they did, but what did nershi do? chug a beer and talk about flashbacks. Perhaps the best incident i have attended so far. A must listen."

" This was my first in the flesh SCI show. I have been a fan for years and have heard dozens of thier shows. The show itself was ok. The changing of the venue was a real bummer. They took all the poeple that were supose to be outside in the cool air and crammed us all into a venue under suited for that many people. I have been to the Electric Factory for other shows, as well as my Uncle (who bought the tickets for us, THANKS UNCLE JOHN!). And he nor I have ever seen that many poeple in there, let alone in such crazy heat conditions. The tempeture in the back of the building had to be 95, which means the middle had to be 105 and up front had to be 115. After Rat Dog, SCI didn`t hit the stage until Midnight. So by that time I was looking for a dynamic show. Instead they got real "Clubby" on me. Don`t get me wrong, i was glad to be there, but they should have cut down on some of the redundant jams and have the crowd a little more ear candy, even if just to make up for the people having to be carried out of the crown by there friends from heat exsaustion. However, as usual, the music was tight, which is one of the greatest things about SCi, they are always tight. Like many other SCI fans, i am also a Phish fan, and though I love Phish, they don`t stand up to SCI when it comes to tight, clean music. Joyful Sound was fantastic as well as Rythym of the Road. Shanandowa Breakdown was great too, but I would have liked to hear a bit more bluegress instead of the club music jams they did. It was just to hot, and it made me dizzy. I do love these guys and can`t wait to see a show where I won`t have to feel like cattle packed into a warehouse. But of course, after all that complaining, I did Download the show. Knowing I was there, makes the music so much better to listen to. Steve Blanda Westville, New Jersey www.ThreeDollarBillStudios.com "

"This was our very first STI show. Among many others, we too were bummed out the venue was changed, but once Ratdog finished up we hit the bottom floor of the E Factory to do what we came to do-SHAKE OUR BONES! It was a great show, lots of energy and just great vibes. Looking forward to seeing them again, as it was a blast as expected! "