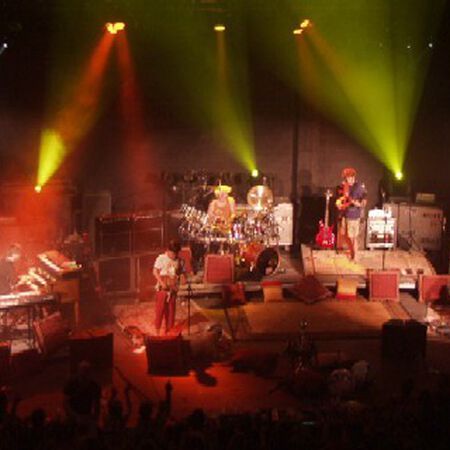 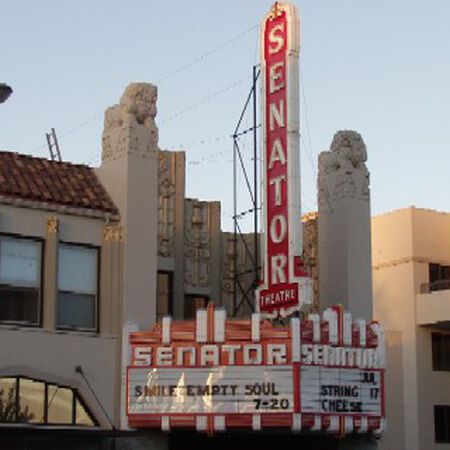 "I remember the balcony being way higher than the floor. They rigged the speakers good for the balcony but when I went to the floor something was missing so I stayed in the balcony. That ramble on was awesome. I think the sound might have been good up front too but I don't remember going there. It was really hot. It was nice cooling off on the grass out front after the show."

"7/17/04 Set One Rollin’ in My Sweet Baby’s Arms - Bluegrass. What a grate way for the Cheese to start out this Incident. A rollickin’ bluegrass stomp sung by Billy and including nice breaks and fills from Billy, Kyle and Kang. Way to go, Kang, makin’ the rosin fly right out of the chute! Mauna Bowa - Fiddle tune. Live studio release - Carnival ‘99 (1999). This cover of the Jean Luc Ponty tune is another vehicle for Kang as violin virtuouso. It also features a great loping bass line and the bass slides which speak the title of the song. Standard reading. Rhythm of the Road - R&B. Live studio release - A String Cheese Incident (1997). This is one of two excellent examples of Old School Billy travelin’ music. It features a number of tempo and thematic changes, as well as screamin’ Kang mando solos and Kyle B-3 breaks. Kyle slips us a bit of the Sanford & Son in betwixt. Look at Where We Are - Bossa Nova. New Cheese. Keith puts the lime in the coconut with his new tune, which exudes a distinct tang of 1960s Antonio Carlos Jobim and Astrud Gilberto, if not Petula Clark. The resurrection of this bossa vibe in the context of the Cheese repertoire is somewhat surprising, until you look back at other Keith tunes and see that this is right down his beach. Todo bem! Born on the Wrong Planet - Rock. Studio release - Born on the Wrong Planet (1996). This is a relatively laid back version, perhaps influenced by the caiaparinha flava of its predecessor. I love the extended and synthgreased intro, which leads into the first verse. The internal jam is likewise conducted in a stretched out manner, with some extremely interesting Michael Jacksonesque “Whoooos!” or sampled electric drill sounds which are either synthed by Kyle or perhaps added at the soundboard by Jono. Ramble On - Rock. This cover of the classic Led Zeppelin II song is Kangsung. Keith carries the mantle of John Paul Jones well, with Kyle adding those key B-3 and 70s synth sounds, which were by the whey, also part of John Paul Jones’ stock in trade. IMHO - the Cheese does a fine job with the song and should also consider getting the Led out more often. Maybe a Battle of Evermore or an Immigrant Song? Don’t Say - Rock. Live studio release - Carnival ‘99 (1999). Perhaps the most compelling and passionate Kyle song, this song lyrically explores the themes of betrayal, and resulting loss of trust, confidence and pride. The dark lyrics are matched with equally troubled musical themes which recall cold and swift subterranean streams, before resolving momentarily in a major chord chorus, and a relatively serene eddy. On the Road - Rock. Studio release - Round the Wheel (1998). This is the other premiere example of Billy Nershi travelin’ music. Fred Sanford keeps peeking out from behind the piano during the intro and B-3 break. You can feel Bussy’s piston churning, as the barefoot boys tear out on this extremely satisfying romp. Lost - Blues. Studio release - Outside Inside (2001). Kyle’s tale of ennui begins with a sitar intro. Sitar aside, this is a pretty standard reading, with workmanlike guitar and mando pepping up the intentionally lethargic tempo of the tune. Paris Hilton, anyone? The standout portion of this version is the honky tonk piano jam out which leads into Paris ... Texas, that is. Texas - Rock. Studio release - Born on the Wrong Planet (1996). Live studio release - Carnival ‘99 (1999). This is one of the four best Old School Cheese tunes, a Billy penned song. Lyrically, the song is a tale of disaster narrowly averted. This version contains some biffed vocals, Kang on the midi pan flute, and a scorching jam out. One Step Closer - Bluegrass. New Cheese. This Billysung Billysong highlights the importance of bluegrass to the String Cheese Incident. Perhaps more than any other recent song, One Step Closer is representative of the signature sound which initially drew us old FOCs to the band and which informed the nascent community of friends of cheese. This particular version features some really fine Billy vocals and Kang fiddle break. Golly, this take on the song is worth the whole download! Sweet Melinda - Rock. This cover of a Peter Rowan song takes a bluegrass number and puts it on some serious rock wheels. Keith gets to sing this one, and he does a fine job of it. The internal piano and mando jam is sweet, and leads into the closing chorus and rave-out. Drifting - Instrumental. Studio release - Outside Inside (2001). This dreamy instrumental is reminiscent of some of Mark Knopfler’s fine film score material, with perhaps a pinch of Sage and Spirit. Way Back Home - Celtic Worldbeat. New Cheese. No studio release - unless you want to count the itty bitty On My Way - Untying the Not (2003), and I don’t. In an alternative universe, made possible through the operation of String Theory, this fine Kyle tune was on the SCI 2003 studio release, Desert Dawn. As well, it was the B side to the Desert Dawn single. The upbeat kilt lifter is Kyle’s best recent songwriting credit and a particularly good version, this is. Encore Come as You Are - Latin rock. Studio release - Round the Wheel (1998). Kang’s finest songwriting is showcased in this excellent tune. Lyrically, Kang continues his exploration of themes of diversity, inclusion, and acceptance. This version is made especially strong by its internal slice of Carlos, Oye Como Va? That gem is placed naturalistically in its golden setting and augments the beauty of this fine rendering. Good Times Round the Bend - Bluegrass. Studio release - Round the Wheel (1998). Like I was saying before, bluegrass is vitally important to the Cheese sound of the past and present. Perhaps the finest Gritty Ditty released until One Step Closer, this version is graced by some super accordian work by Kyle and acoustic Kang mando. Ain’t this the way to close out a fine String Cheese Incident? "

"The Chico show was so much fun!! The hookah jam to start the second set was pretty phat and the boys delivered the goods all night long. A must for your live collection. A great venue although way too hot inside, but the people were kind , the music was incredible, and the version of ramble on was really cool. A well deserved trip south from eugene for this show. Cant wait for the next incident to occur. Oh yeah, it smelled really kind inside the theater : ) peace to all and for those lucky souls who get to catch the band at Telluride, enjoy!"

"Amazing! Ramble On!! I`ll be rambling on about this show for a while. Every time I think they can`t sound better then they already sound, they prove me wrong. They just keep geting better and better. Every time I Say CHEESE I smile! Peace- Adam Curtis."

Born On The Wrong Planet 937

Good Times Around The Bend 263