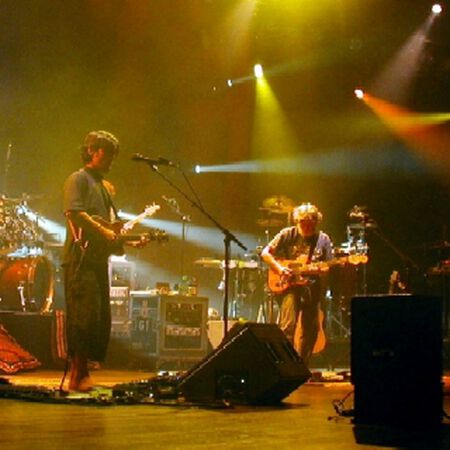 Lester Had A Coconut 534

The Mighty Quinn (Quinn the Eskimo) 170

The Mighty Quinn (Quinn the Eskimo) 138

"I have been wanting to see String Cheese for 2 years+ now and since I haven`t had the chance (no car, at the mercy of my friends for a ride). This was my first time and it was unbelievable without doubt. I couldn`t have asked for a better opener with "One Step Closer" and "Born on the Wrong Planet" was great as well. "Lonesome Fiddle" was a great way to start the second set with maybe the best jam of the night coming from that tune. "Joyful Sound" was fun with the audience really getting into it. The encore was perfect with "Quinn the Eskimo" finishing the night. I`m hooked on this band right now and hope to make it to NYC for New Year`s for a show at the Garden and/or Radio City Music Hall. Don`t shy away from downloading this show...it was unbelievable. "

"Hello all cheese fans, If you were in Asheville on fri. 10/22/04 for the show at Thomas Wolfe Auditorium you know what I am going to proceed to bragg about. The first time I saw the cheese was at a similar venue in Raleigh North Carolina at our Civic Center, the 17th of April 2003. My first time seeing them was like my mecca, right at home, and they delivered well. But at this show for some reason it was like all stars and planets lined up and for 5 or 6 hours or what ever it was and they stayed that way and all worries were lost. It was strangely spriitual for me I made the trek with 4 other friends of mine Maggie, Lee, Ivy, and Mary Clare. None had seen the cheese before so it was exciting to share the magic with 4 of my closest family of friends. Not that I am an expert having only seeing two string cheese shows in my lifetime and fully I fully realize this. But what I experienced the first time was so incredible and like nothing else ive gotten from other bands, it was wonderful to see how in just a year or so the band has evolved musically. Any of you who saw the show must have recognized the more house party feel to this particular night. Which is great and really emphasizes the Cheeses ability to appeal to those newcomers who may not listen to much bluegrass or salsa for instance but get exited with the tunes like "Look at where we are" or any of the tunes they completely jammed out. Me being a bluegrass fan to begin with and being introduced to the different styles is kind of like the reverse of what I just mentioned. My point is that something about Asheville, the town and location of the venue made the night ( which was highly anticipated) that much more perfect. When I heard Lonesome fiddle Blues at the begginning of the second set I was simply taken. It was so worth the 30.00 to say the least, in fact because of the bonding between my friends and making new ones at the show it seemed worth more than money can by.I dont mean to blabber but this is one band who gets better every time I see them and inspire the hell out of me. Which is a good thing, I believe it was in Look at where we are when billy said something about heaven and something clicked up in the ocean of my head. Anyways I had one of those moments where I thought about how good we all have it to be living with the freedom we have as americans. I can`t think of a better way to celebrate a democracy than to see a show like the one that friday night and all the things that envelope around the cheese, the scene in Ashville welcomed the cheese and it was magical to say the least. We are so very limited by words. "