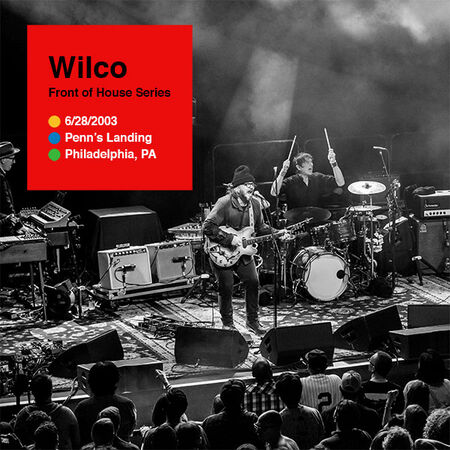 Wilco and tour co-headliners Sonic Youth head into Philadelphia's Penn's Landing (on the banks of the Delaware River) following two shows at New York's Central Park.  By this time, the Tweedy / Stirratt / Kotche / Bach / Jorgensen five piece lineup had been playing together for about a year, with Mikael now playing a full array of keyboards, resulting in a more dense and intricate sound.  Highlights of this show center around the still-formulating arrangements of songs that would later appear on the A Ghost Is Born album, including a very electric version of "Muzzle of Bees" (with some different lyrics) and a bopping take on "Spiders (Kidsmoke)" that splits the difference between the earlier "folk-y" approach and the full-on "Kraut Rock" version to follow.    In addition, the encore includes and extended and intense version of "Laminated Cat" featuring frequent collaborator and then Sonic Youth member Jim O'Rourke.

I Am Trying To Break Your Heart 379

At Least Thats What You Said 371

Laminated Cat (aka Not For The Season) 595