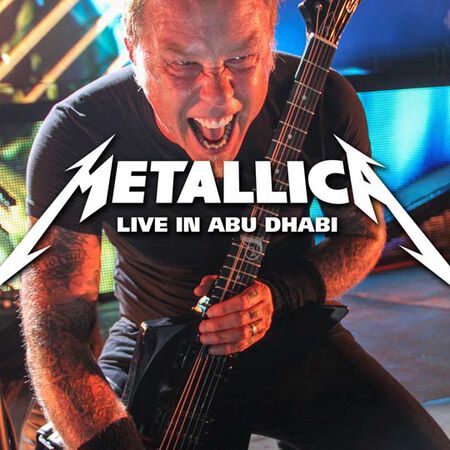 *DUE TO TECHNICAL DIFFICULTIES, WE ARE UNABLE TO OFFER YOU THE FULL SET LIST AND ARE MISSING FOUR SONGS.  THE PRICE OF THE DOWNLOAD HAS BEEN REDUCED TO REFLECT THIS.
This was the sixth show that Metallica performed in 2013.
This was only the second time that Metallica performed in Abu Dhabi.
The last time Metallica performed in Abu Dhabi was on October 25, 2011.
Nine out of the 18 songs on the setlist had never been performed in Abu Dhabi.  These songs included: "Hit the Lights", "The Shortest Straw", "Harvester of Sorrow", "The Unforgiven", "The Four Horsemen", "Broken, Beat and Scarred", "Orion", "Battery" and "Fight Fire With Fire".
The band performed 18 songs off of six albums: Kill 'Em All (3), Ride the Lightning (4), Master of Puppets (3), ...And Justice for All (3), The Black Album (4), Death Magnetic (1)
Songs performed that night not available for download are:   Sad But True, Nothing Else Matters, Enter Sandman, and Seek & Destroy. Our apologies!

For Whom The Bell Tolls 320