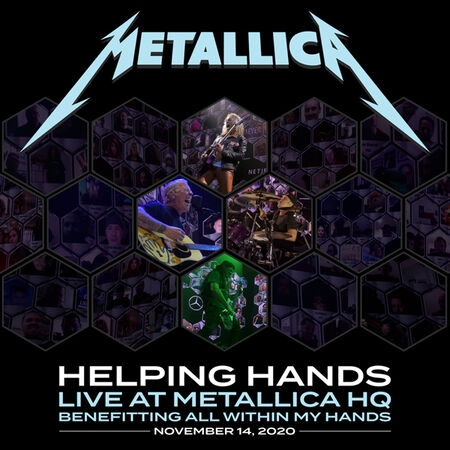 House Of The Rising Sun 375

For Whom The Bell Tolls 316

Metallica's Helping Hands Concert streamed LIVE from HQ on Saturday, November 14th. Their first-ever worldwide pay-per-view event! This special acoustic show benefits the band's foundation, don't forget to sign up to keep in touch with All Within My Hands and hear about how your contributions help others around the world. 100% of money raised goes directly to help someone in need.

"It was really cool experience, and the music was great. I have never been to an in person concert, but that is my biggest dream. Hopefully in 2021 they can have in person concerts. The t shirt is really cool, even though it came pretty late. Overall it was super cool that they could do some sort of fundraiser and online concert. "

"Loved the experience, like a fellow Metallica brother mentioned .. I received no TShirt yet ! Plus I’m a tad pissed you can’t download these songs on a different playlist . Now I need this app to listen to it !!! "

"What a brilliant experience to see Metallica in this horrible pandemic. But the only downfall for me is that I bought a ticket for within my hands charity and never received my T-shirt "

"Absolutely loved this!!! Initially watched it live and then again the following night. Please, please, please do it again!!! The only disappointment is that I have the audio download which is great but why can’t we get the visual too? (Maybe we can but I can’t find it?). Love you Metallica x"

"Lots of bands did something like this before Metallica. I knew Metallica would make their virtual presence felt, but I was getting a little impatient. Metallica didn't just play a few of their songs acoustic. They reworked and reimagined them for an acoustic performance. Some of them they had done before, but some were done for the first time. Creeping Death has been reimagined for acoustic. It sounds awesome. Now That We're Dead was completely unexpected. They have done The Unforgiven before, but they add a little extra to it here. The second half of the set was completely unexpected and awesome when watching it live. I like the way they edited this for Nugs, making the audience chat a track. It makes it way easier to put these songs on playlists, or listen to the show without the chatting. ??????????"