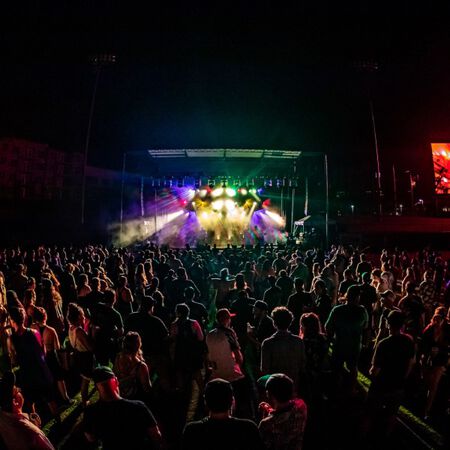 Set 1 cut short due to lightning.

"I ate a pretty delicious hotdog during the rain delay. I had fun at the show with my friends. >Munchkin was my highlight. I went back the next night. "

"Board sounds very solid to my ears. Vocals might be a bit forward in the mix here and there, but that's small beans compared to the issues we've been seeing. Glad to see some improvements are being made! Pretty interesting show to be at. The venue was amazing, security was friendly and lax, and nobody cared what you're ticket said. Everyone was on the field by the beginning of the show. On Time was well played and a song I hadn't caught yet which was cool, and by that time the weather was definitely rolling in and looking a bit ominous. It was funny to watch the crew scramble during Shem as the lightning got closer, and the rushed jam made it pretty clear that we were in for a delay. I remember turning around and seeing one of the most intense, picturesque bolts of lightning at that exact instant, I'll never forget it. The chaos of the Shem composition definitely fit the vibe at the time! After about an hour break, the band came back with a pretty solid extended set. The jam out of Helix was very solid I thought, with Barber hitting some cool patterns. Miracles fit nicely in the second slot after the rain delay, and it really got my hopes up that we'd be in for a very special set! Munchkin->RS->Munchkin was probably my highlight of the night, just a really nice jam and the Rocket Science stuck in there really helps you forget it's still Munchkin for a bit. Next up was the 'Fusion' Tractorbeam. Not exactly my favorite of the T-Beams they've been playing with, but upon Relisten this was still a pretty fun version, and I really enjoyed hearing it start organically out of a jam as opposed to transitioning to it from another jam. A well played cyclone blows us out of the Beam, and they finish the Helix to end the big meat segment of this extended set. MEMPHIS was a tight little rager, always fun to hear in the south, and I got the vibe from the short yet digital jam that the band may be working on fitting Tractorbeam elements more organically into some old Bisco originals at some point in the future, something I think we'd all like to hear! The transition to Wet was smooth as butter, and a great way to end the stormy set. For the record, I haven't heard many better versions of Mitts, either. Magner took the lead and shredded us all one last time, which was super fun to see. Odd show, incredible venue, and the greatest band in the land! 3.5/5 Highlight: Helix->>>Munchkin, Kitchen Mitts"