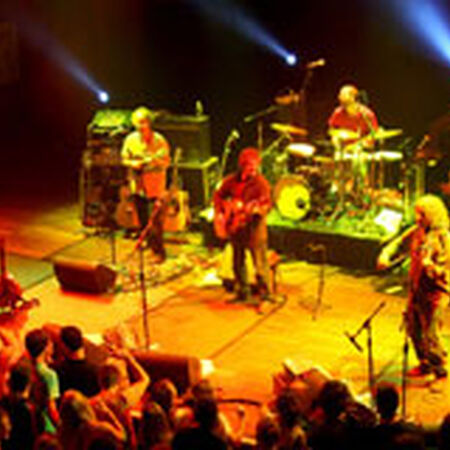 "Nice show, but the House of Blues was a odd venue. There is no such thing as a bad Railroad Earth show at least in 2008, but maybe it was my friend being patted down and felt up while soaking wet before she was allowed in that gave us this bad taste that didn't go away. Milwaukee two days later smoke more to the whole group that traveled, but the "Head" and "1759" are stuck in my memory from Chicago and the tapes do sound good."

"I couldn't agree more with the previous review. The best Head I've ever heard. I was in the front row the whole show and they were on fire. Complete energy between the band and crowd. It was magical. I met Tim before the show, and this is what he told me: "We plan on rocking the house tonight". That's exactly what they did."

"Are you kidding me?! No reviews?! This is the most spirited cold rainy night crowd sparks the band right out of the gate shows that I have ever seen. Carbone plays guitar like it was his birthday. Dual saxophone roadhouse grit. The trade offs on the best "Head" ever! LAB and Peace before the encore! Dancing in the aisles, the halls, the bathrooms! Security is freaking out because some humans are enjoying this beyond normal comprehension. Get this now! Everybody gets off this night! "