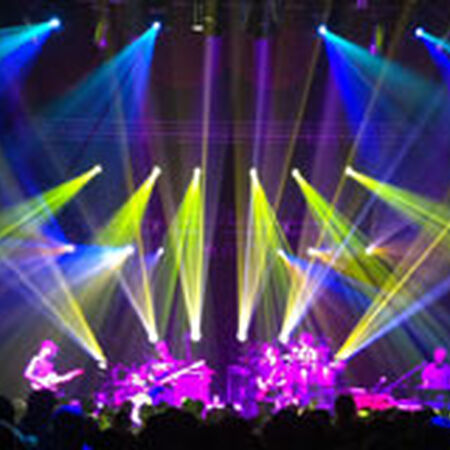 "This was my buddy's first UM show, and I think he's now converted to Umphreekism. I think this was my 7th or 8th time seeing the band, and in the middle of the second set, my buddy turns to me and asks how this show rates to the others I've seen, and I told him "Every set I've seen these guys play is better than the last," to which he repied "That makes you a true fan." I think that's a testament to how well this band keeps consistently improving. There's no end in sight! The entire show Friday night at the Depot was interesting, exciting, funky, psychedelic... Umphrey's just has such an intense connection with their audience. They're smiling, making eye contact, etc. They just deliver on a level I don't really even know how to describe. This was my first time to Salt Lake City, and I have to say that the crowd at this show had some of the best energy I've ever seen, which always contributes to the band's playing. Everyone was dancing, giving each other high fives. I was feeding off the "high" energy big time. Highlights from this show included: 2nd Self - Fun, energetic opener. It instantly grabbed me. Water - A definite soul-searcher Push The Pig - dropped the set in a funky, dark place Smell the Mitten - This groove just always fucks with my head... in a good way! Words - This song just keeps growing on me, as do Bayliss' lyrics Divisions - I always love this song, and I love the way they bookended the second set with it. Nemo > Graceland > Nemo - The crowd was loving this. I knew that when a stagehand came out with a lyric sheet for Bayliss, we were in for a treat. After the song, Bayliss crumpled up the sheet and tossed it into the crowd. The encore was a perfect night-capper. Andy's Last Beer had everyone dancing. Before the song, Ryan tells us that the other guys only wanted to do one song, but he convinced them to do two. I couldn't have wished for a better second song... Song Remains the Same! - My friend is a huge Zeppelin fan, and he was coincidentally wearing a Zeppelin t-shirt. This reminded me of a story another friend of mine told me about his first UM show in 2005 where someone was wearing a Zeppelin t-shirt and Bayliss dedicated the same song to him. This rocker was a perfect way to send everyone home, and they nailed it! At the end, the whole band left Jake on the stage to serenade us with a Rain Song outro. Simply gorgeous... I love you, Umphrey's McGee."