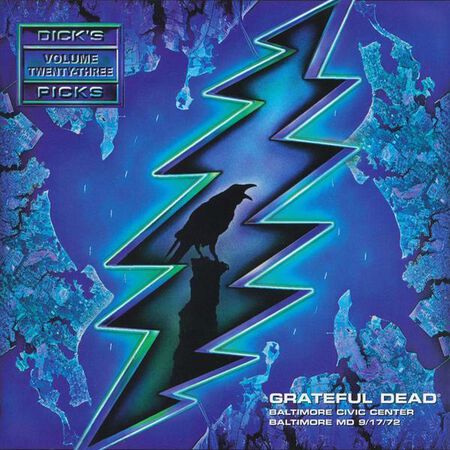 1972 was quite a creatively bountiful year for the Grateful Dead, topped off by their first full-fledged tour of Europe that spring. The momentum of the overseas trip carried over to the band’s stateside shows (despite their having to bid a regretful adieu to Pigpen, whose final illness precluded his traveling), and by the time the Dead got to Baltimore in September of ’72 (nearly a decade before Cal Ripken first laced up the spikes for the Orioles!) the band was playing at the top of its game.

The Dead’s musical reach and grasp were growing in all sorts of ways in 1972. Even as they honed and tightened their ability to work within concise song forms, the band’s jamming on the more open-ended material became more expansive and jazzily exploratory than ever. The Baltimore show displays both these facets of the band’s artistry beautifully: the former with crisply played versions of such favorites as "Friend Of The Devil ," "Loser," "Jack Straw" and Merle Haggard’s "Sing Me Back Home"; and the latter with some spectacular and lengthy leaps into several of the Dead’s most rewarding jamming vehicles, including an 18-minute "Playing In The Band" and a brilliantly complex 39-minute "The Other One" that some Deadheads number among the best ever played.