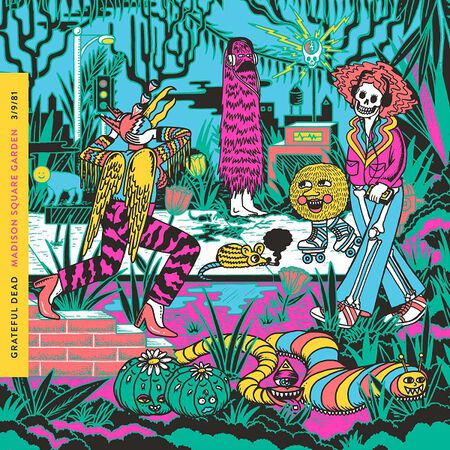 “We’re just now starting to loosen up to the point where we were, say, back in 1970, ’72, where we can start drifting from key to key, from rhythm to rhythm, and in the jams, some interesting stuff has come up. Once again, we’re tending to go new places every night.” - Bob Weir, Rolling Stone, 1980

3/9/81 at Madison Square Garden delivers all that. It's got color and texture and freshness, keyboardist Brent Mydland's Hammond organ painting a new layer for the Dead to dabble on. And dabble they did, from the "shot out of a cannon" opener of "Feel Like A Stranger" to the "fleeting romance of 'Althea,'" to the high-gloss 80s blues of the first set to the second set, both intense ("China>Rider", "Samson And Delilah," "Estimated Prophet") and dramatic ("Ship Of Fools," "Stella Blue) in its ability wrap you up its spirals and accents. It's all undergone Plangent Processes tape restoration and speed correction, with mastering by Jeffrey Norman. Hot, hot, hot!

"Far and away the highest energy show I’ve listened to yet! Fantastic. "

"Mix sounds great on this "

"What a great show! Fun and entertaining!"