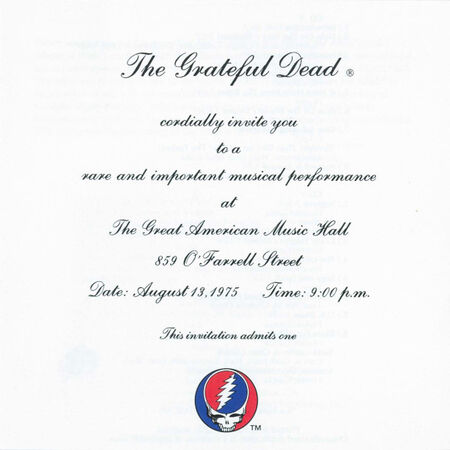 One From The Vault: Great American Music Hall

One From The Vault

One of only four live performances during the Dead's tour hiatus, 8/13/75 was an invitation-only affair at the Great American Music Hall in San Francisco, California. Recorded shortly after completion of Blues for Allah.

A Note From Dan Healy

When we completed the recording and mixing of the Blues For Allah studio album at Weir's studio, which this album was the maiden voyage for, we gathered up our instruments and equipment and moved to the Great American Music Hall. The idea was to perform live to the world, for the first time, Blues For Allah in celebration of not only the completion of the album but also the beginning of Grateful Dead Records. While this recording is one of the most widely collected, not until now has there been a high quality good sounding mix released. This represents the beginning of the release of the vault tapes. More To Come.

"Love Bill graham Intro into Help on the Way. And the harmonies. Sweet. "

Setlist at One From The Vault: Great American Music Hall, San Francisco, CA on Aug 13, 1975

It Must Have Been The Roses 306

Goin' Down The Road Feeling Bad 435