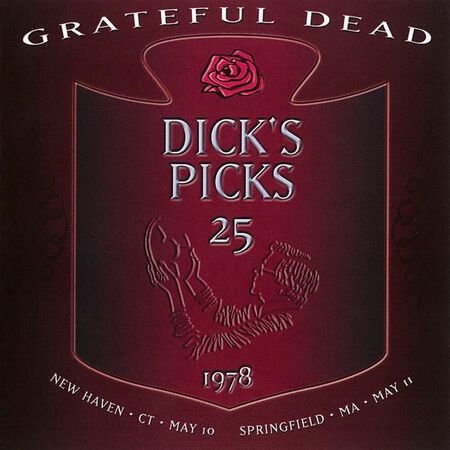 Features material from two shows in their May 1978 tour: Veteran's Memorial Coliseum show in New Haven, Connecticut on 5/10/78 and Springfield Civic Center in Springfield, Massachusetts on 5/11/78.

The 25th installment of Dick’s Picks presents the bulk of two shows on consecutive New England nights in the spring of 1978. The first finds the band in New Haven, home of Yale University and quite possibly the best pizza to be found anywhere in the United States. Particularly noteworthy are: the inspired juxtapositions of (and turn-on-a-dime segues between) “Let It Grow” and “Deal” (which closed the first set) and “Bertha” and “Good Lovin’” (which opened the second); an “Eyes Of The World” that weds a particularly brisk tempo with playing of great subtlety and delicacy; a long and rewarding Rhythm Devils excursion with strong Caribbean and Brazilian flavors, which dovetails beautifully into a powerful “The Other One > Wharf Rat > Sugar Magnolia” sequence to bring it all home.

The next night, after a nice, easy one-hour ride up I-91, the Dead were in the birthplace of basketball, Springfield, MA, to play at the town’s Civic Center, one of those venues where they just always seemed to play well. 5/11/78 was no exception to that rule, as the band effortlessly picked up where they’d left off the previous evening and never let the momentum flag, getting the crowd move in the cozy arena with first-set faves like “Cold Rain and Snow,” “Beat It On Down The Line,” “Tennessee Jed” and a terrifically played “Lazy Lightnin’ > Supplication,” then lighting up the second half with, among other delights, “Scarlet Begonias > Fire On The Mountain,” a tirelessly grooving “Dancing In The Streets,” a heartbreakingly lovely “Stella Blue” and a knockout “Around and Around.” They topped the evening off with a double-dip encore: a rare (one of only a dozen) Dead performance of the then-current Warren Zevon hit “Werewolves Of London” and a rocking bonus of “Johnny B. Goode.”

"This is two shows on consecutive nights. Cold Rain is the opener to the next night in Springfield, MA. That’s the infamous “drug” show where entire band was whacked out on mesculine. Set 2 of May 11 starts with Scarlet>Fire. "

"More than 5 hour show with a 4 hr second set and 2 encores. Yeah. they were feelin' it"

"What a setlist. Unmatched catalog"

They Love Each Other 465

Fire On The Mountain 516