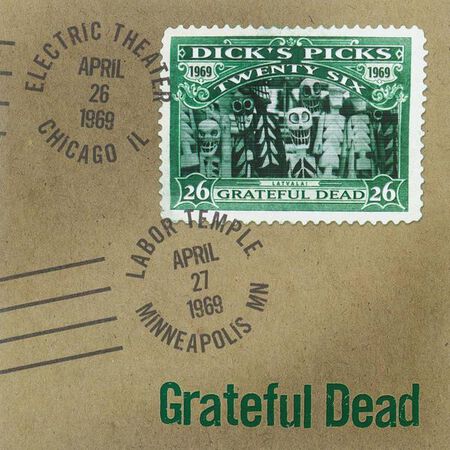 Featuring material from two of Dick's favorite shows from one of his favorite periods: the Electric Theater in Chicago, Illinois on 4/26/69 and the next show at the Labor Temple in Minneapolis, Minnesota on 4/27/69.

Just as there was nothing, as the saying goes, like a Grateful Dead concert, there was nothing quite like hearing the late Dick Latvala describe a Grateful Dead concert. When Latvala — longtime keeper of the Grateful Dead tape Vault and founding father of the series of archival recordings known as Dick’s Picks — was especially enthusiastic about a Dead show he was not stingy with the superlatives. It was not just a “good” or “great” show — it was the most significant thing ever achieved in the history of music! A high-water mark in the annals of Western civilization! And so on. When Dick departed this life in 1999, he left us with sweet memories of many such raves. So we’re especially pleased that the latest release in the series that still bears his name contains one of the shows that Dick liked to rave about the most, from one of his very favorite periods in Grateful Dead music. Presenting Dick’s Picks, Volume 26, a two-CD set featuring highlights from the Dead’s April 26th, 1969 show at Chicago’s Electric Theater, and, in its entirety, the deserving object of Dick’s over-the-top affections: the next night’s spectacular performance at the Labor Temple in Minneapolis.

The segment of DP26 from the Electric Theater begins with a batch of tunes from the as-yet-unreleased Aoxomoxoa, including a tantalizing tease at the end of “Mountains Of The Moon,” which seems like it wants to be “Dark Star,” but makes an abrupt prankster’s detour into “China Cat Sunflower.” Other delightful surprises from this set are a version of “The Other One” with “The Eleven” stealthily tucked into the middle, and a major rarity — Jimmy Reed’s “I Know It’s A Sin,” which the Dead only played about a dozen times.

To listen to the next night’s festivities in Minneapolis is to understand why Dick Latvala worked himself into such a lovely frenzy over it. The band lets us know that they mean business early on, opening the set with a song that usually marked the climax of a Dead show in those days: Pigpen’s signature showstopper, “Turn On Your Lovelight,” which morphs into John Phillips’ classic cowboy-movie-in-miniature, “Me and My Uncle,” which in turn gives way to “Sitting On Top Of The World.” Having thrown down the gauntlet so decisively, the Dead then head straight for parts unknown, with one of the great versions of “Dark Star” of that era, continue headlong through “St. Stephen,” “The Eleven,” and then, right back where they started, to “Lovelight.” Pigpen, acting as though the astral travels of the previous hour had been a mere digression from the business at hand, picks up the narrative with a nonchalant “…like I was tellin’ ya, some ol’ time ago…” and proceeds, like Lord Buckley’s Nazz, to lay it down. So that it stays there. A cacophonous end to “Lovelight” and a lovely encore of “Morning Dew,” and then the Dead ride off into the Minnesota night, leaving the audience (including you, the home listener, decades later) to retrieve what’s left of its senses.

Mountains Of The Moon 405

Sitting On Top of the World 217

Turn On Your Love Light 925