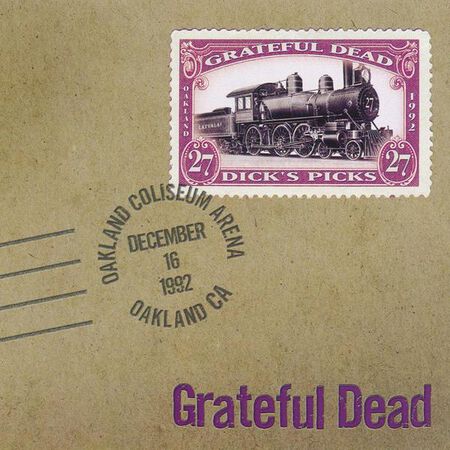 As Grateful Dead Records approaches the tenth anniversary of the Dick’s Picks series of archival recordings, we find ourselves, appropriately enough, making a visit to the decade in which the Grateful Dead tape vault first began to yield these never-before-released treasures: presenting Dick’s Picks, Volume 27, featuring, in its entirety, the Dead’s performance at the Oakland Coliseum Arena on December 16th, 1992, with some tracks from the following night’s show thrown in as a bonus.

This edition of Dick’s Picks is notable for numerous reasons: it is not only the most recent show thus far released in the series, but the first featuring the Dead lineup with Vince Welnick as sole occupant of the keyboard chair (the two previous releases on which Vince is heard, Volumes 9 and 17, were recorded in 1990 and 1991, respectively, during the period that the band boasted a two-keyboardist configuration including Bruce Hornsby); the 3-disc set also marks the Dick’s Picks debut of more than a half-dozen songs, including Willie Dixon’s “The Same Thing,” the Hunter-Garcia rocker “Loose Lucy” and the terrific medley of The Who’s “Baba O’Riley” and The Beatles’ “Tomorrow Never Knows.”

The Dead were coming back from a lengthy layoff when they played these home-turf shows in Oakland, and their enthusiasm at being back on the boards shines through: the shows of December ’92 were, in the estimation of many longtime observers, among the high points of the band’s later years. It’s all captured here much as the audience heard it, beautifully mastered from the original two-track source tape.

"I was at this show during my senior year in high school, thanks for letting me hear a quality recording of it."

Stuck Inside Of Mobile With The Memphis Blues Again 558

All Along The Watchtower 398