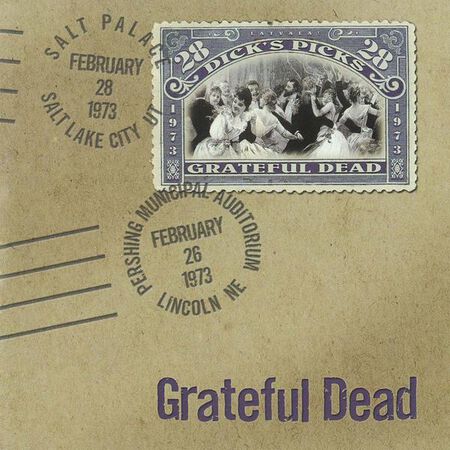 1973 was, by widespread consent of the Deadhead community, one of the watershed years for the Grateful Dead as a performing band — a year in which the Dead created some of its most fearless, passionate and flat-out beautiful music. It is not surprising, then, that 1973 has already provided material for three of the most memorable entries in the Dick’s Picks series of treasures from the Grateful Dead Vault, or that the same great year has yielded up yet another winner for that series: welcome to Dick’s Picks, Volume 28, a four-CD set featuring the lion’s share of two sensational performances, from Lincoln, Nebraska and Salt Lake City, Utah, recorded in February, 1973

The previous 1973 Dick’s Picks titles all were taken from shows performed in the latter part of that year, following the release of Wake of The Flood, the Dead’s first album on their own record label. Volume 28, on the other hand, comes from very near the beginning of that year, hot on the heels of Europe ’72, when the band was just beginning to break in the great new material that would be recorded for Wake and its successor, Grateful Dead From The Mars Hotel. Several of those songs are heard here and prove to be, even so early in their performance histories, mature and deeply satisfying works. This is especially evident in the two performances of “Eyes Of The World” included in the set — even though the song had received its public premiere little more than two weeks earlier, it was already well on its way to being one of the most satisfying vehicles for improvisation ever created by the Dead. Some of the more established cornerstones of the band’s repertoire are also well represented here, including lengthy and deeply exploratory versions of “Dark Star” and “Playing In The Band,” earthshaking renditions of “Truckin’” and “The Other One” and a breathtaking “Morning Dew.”

It’s all played with the high-wire daring and jazz-like telepathy that characterized the Dead’s performances throughout 1973, and as always, impeccably mastered from the original two-track source tapes.

They Love Each Other 354

They Love Each Other 351

Goin' Down The Road Feeling Bad 472

We Bid You Goodnight 186