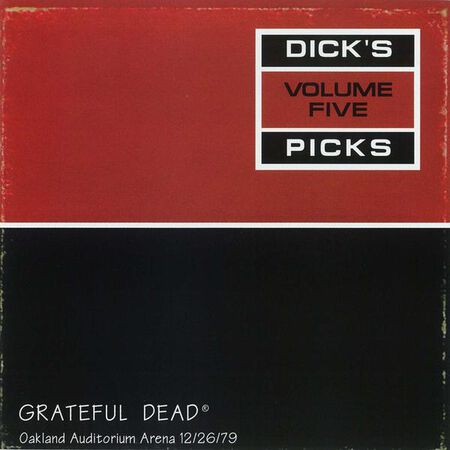 Dick's Picks, Volume 5 is a fine portrait of the band in this period. Significantly, it is the first release in the series that presents a complete show from start to finish, and so the first to show how a Dead show told the whole story - the nice gradual exposition, the plot getting more complex, the suspense building to a fever pitch, and the big, happy ending. As on all the Dick's Picks releases, you're hearing this stuff just as they played it, no overdubs, no cosmetic repairs, no studio trickery. There are, in other words, mistakes! But the Grateful Dead, on a good night, had a way of turning straw into gold, and what mistakes are here are indicative of the bracing recklessness that characterized the Dead at their best. There are times, especially in this show's amazing second set, when you get that scary/exhilarating feeling of being in a car with no brakes, careening down a preposterously twisty mountain road fraught with hairpin turns and no guard rail, clinging to the faith that you'll get to the bottom in one piece. There are times where the music seems destined to rip apart at the seams, only to coalesce into something utterly startling in its power and clarity. Take, for example, a sequence coming out of "Estimated Prophet," that you're sure is going to segué into "Terrapin Station," but instead turns into a completely over-the-top jam that sounds like a little like a bluegrass tune gone mad, with musical references to everything from John Coltrane's "A Love Supreme" to Isaac Hayes' "Theme From Shaft". And if you're a lover of that quintessential Phil Lesh moment known to fans as "dropping The Bomb," you'll be pleased to know that this set features one of the more spectacular and surprising examples of the species.

"Spectacular performance. From the opening notes to close of each set, there is a purpose, intensity, and at time searing quality to each song. Possibly the best Alabama Getaway ever, certainly that I had the pleasure to see in person. Second set is seamless, building into a wild pre drum’s crescendo. One of my all time favorites. First night of my first ever “run” of shows. "