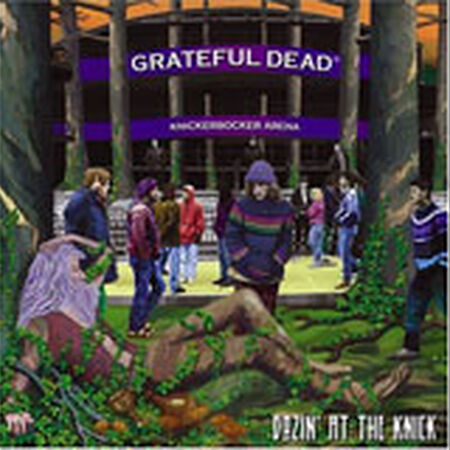 Dozin' at the Knick: Knickerbocker Arena

Don't let the title fool you - the music on this set is anything but sleepy. In fact there's enough joyful noise here to rouse even ol' Rip Van Winkle himself from his fabled slumber. Recorded when the Grateful Dead was on one of those rolls (the hot 1990 spring tour, which also featured the band's famous first encounter with Branford Marsalis), this set is culled from three nights in New York's state capital, the Dead's first appearance at a venue that became a Deadhead favorite. This is a kind of composite "dream show" and then some, with a "first set" assembled from highlights of the first two nights, followed by the entire second set from 3/25, and a bonus chunk of night #3, set #2. Among the tunes appearing for the first time on a live Dead album are "Dupree's Diamond Blues," "Just A Little Light," "Row Jimmy," "Blow Away" and "The Wheel." Appearing for the first time anywhere are Brent Mydland's "Never Trust A Woman" and the ever-popular "Mud Love Buddy" Jam. All this and much more, with the band in peak form, beautifully mixed from the multi-track master tape by producers Phil Lesh and John Cutler.

"Not including 3/24/90 Loser is a huge mistake for the release of this disc."

"A great starting point for people new to live Dead. It was my introduction many years ago. "

When I Paint My Masterpiece 354

All Along The Watchtower 462

And We Bid You Goodnight 172

Goin' Down The Road Feeling Bad 413