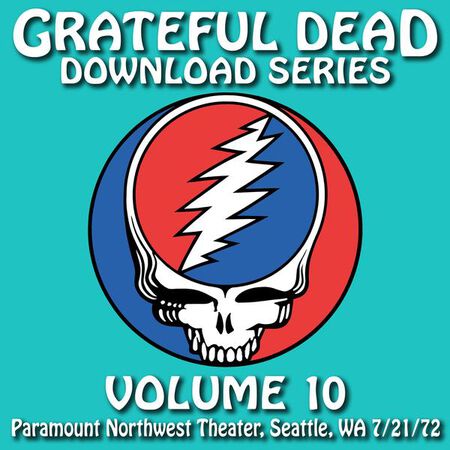 After venturing into the late 1980s for the last Download Series release, Download Vol. 10, is a 3 disc release which heads back to that most classic of Grateful Dead years, 1972. Upon the band's return from Europe in May, they played a few shows in June and July, but it was this concert, July 21, 1972, that would mark the beginning a virtually non-stop touring schedule that would take them to the end of the year, and would include some of the best shows the Grateful Dead ever played: 8/27/72 in Veneta and the Berkeley Community Theater run that preceded it, 9/21/72 in Philadelphia, 11/17/72 in Wichita, amongst many others.

This first show of that lengthy run would be an auspicious start to the sustained brilliance of the next five months. Starting with a first set that featured many of the first set songs of the era played to perfection, including a monster "Playing In The Band," the second set, as would be expected, was where the real fireworks would be found.

A raucous "Truckin'" moves smoothly into "Drums," followed by a melodic, exploratory rendition of "The Other One," which drops into a perfect reading of "Comes A Time." Ending the show is an intensely powerful "Goin' Down The Road Feeling Bad > Not Fade Away" combo (the first part of "Not Fade Away" is missing from the master tapes, as is the first song of the evening's performance, "Promised Land"; otherwise Download Vol. 10 presents the complete concert). As a bonus, we have included the best material from the next night's concert (7/22/72), including lengthy workouts on "Bird Song" and another stellar "Playing In The Band."

Goin' Down The Road Feeling Bad 321