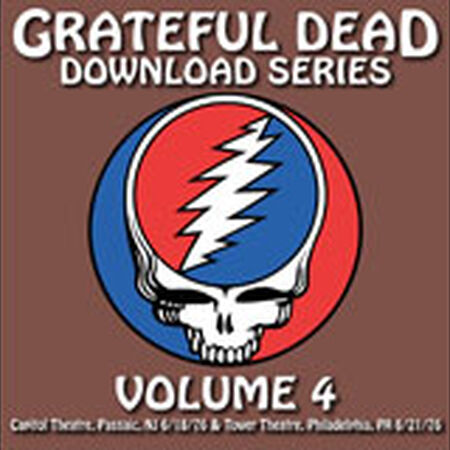 June of 1976 is an essential month in the history of the Grateful Dead, as it marked the return to their prolific touring schedule that would continue virtually non-stop for almost 20 years. Starting in Portland, OR, on June 3 and running to the East Coast and Midwest through the end of the month, the reinvigorated Grateful Dead, with Mickey back in the fold, returned to the road and immediately let it be known that they were back with a vengeance. As the tour gained steam through Boston and New York, the band landed for a three night run at the Capitol Theatre in Passaic, NJ. The middle night of this run, 6/18/76, is a typically hot, and surprisingly exploratory show.

New songs recently added to the repertoire, such as "The Music Never Stopped," "Crazy Fingers," "Samson and Delilah" and "The Wheel" are all present on Download Volume 4, and sound as though they've been a part of the band's song book for years, along with the revitalized "St. Stephen," "Cassidy," and one of only five Grateful Dead performances of Jerry's "Mission In The Rain." The highlight of the big second set jam is a wonderful "Eyes Of The World" that begins with a very long instrumental passage reminiscent of the 1974 jazz-influenced version of this song.

Download Series Vol. 4 is the complete 6/18/76 concert, minus one song, "Tennessee Jed," which was omitted because the master tape was plagued with technical problems that could not be fixed in mastering.

To round out Download Volume 4, highlights from the next run of shows in Philadelphia are included, featuring stellar versions of "Candyman," the new "Lazy Ligtnin'> Supplication," an incredibly jammed-out performance of "Scarlet Begonias" and a 23 minute "Playing In The Band" featuring a very distinct "Fire On The Mountain" jam in the middle, led by Phil. To cap it all off, a sweet reading of the newly-returned-to-action "High Time" from the tour's penultimate show in Chicago ends the release.