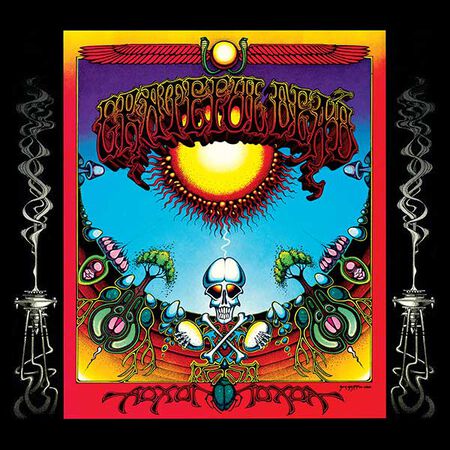 “In 1969, for their third album, the Grateful Dead eschewed outside producers and created Aoxomoxoa themselves, beginning a run of self-produced albums that would continue until 1977. Scrapping the first sessions, which were recorded to eight-track tape, the Dead now had 16 tracks with which to experiment their psychedelic sound, with an album that included entirely Robert Hunter-penned lyrics for the first time.” - Archivist David Lemieux

All together now, "ox-oh-mox-oh-ah!" This summer marks the 50th anniversary of the enigmatic classic AOXOMOXOA and we're celebrating with a DELUXE EDITION featuring two versions of the album — one fully remastered from the original 1969 mix and the other remastered from the definitive 1971 band-produced mix, both done by Grammy-winning mastering engineer David Glasser of Airshow Mastering in Boulder, CO. This is the first time both mixes will be presented together in a single release. And if that weren't enough, we're rounding it out with a bonus disc of previously unreleased live music recorded January 24-26, 1969 at the Avalon Ballroom in San Francisco, CA. Newly remastered by Jeffrey Norman, these shows were among the first live performances ever to be recorded to 16-track tape.

The live tracks include early versions of two songs from the album – “Dupree’s Diamond Blues” and “Doin’ That Rag” as well as the final live performance of “Clementine,” a song the band began performing in 1968 but was never released on a studio album. The band also played several songs from its second album, ANTHEM OF THE SUN. Highlights include a dynamic romp through “New Potato Caboose” and an electrifying “Alligator>Caution” jam that captures Pigpen at his primal best.

Mountains Of The Moon 250

Mountains Of The Moon 242

And We Bid You Goodnight 159