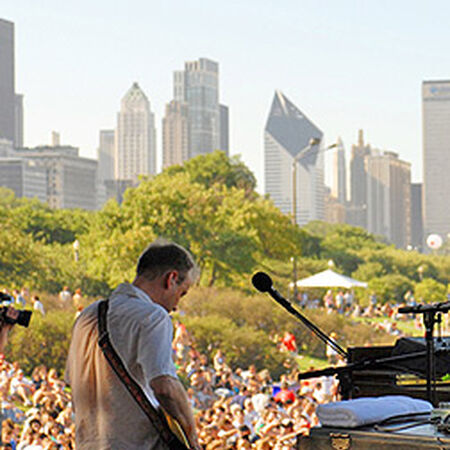 Formed in 1997, Umphrey’s McGee has risen to the top of the improv-rock scene by blending diverse musical influences together with impressive melodies, lyrics, harmonies, and blistering musicianship.

"Coming straight off their first gig in Japan at the Fuji Rock Festival the previous weekend, Chicago’s own Umphrey’s McGee came out firing with one of their oldest and arguably most quintessential songs, “All in Time.” This rollicking 15-minute journey set the tone for the set that would see UM impress newcomers with their musical chops while pleasing their devoted local fan base by remaining true to their roots. But make no mistake, UM’s set was not for all Lolla festival goers, because in remaining true to form, they did not shy away from songs with long and complex instrumental interludes including a notably exploratory take on their instrumental classic, “Dump City.” In fact, toward the end of it, I witnessed a near-by teenaged girl remark to her friend that “they just went 10 minutes without singing, someone shoot me” as she left to find something more interesting to her. While I certainly appreciate her spirited candor, those who were willing to actively listen to the energetic musical interplay were rewarded handsomely with a great rock show. The set concluded with a trio of tunes that are featured on their 2 most recent studio albums, with my personal highlight being "Believe the Lie," a stomping, defiant rock anthem that featured and extended intro section reminiscient of Miles Davis. Thanks to UM for a great set and to Lollapalooza for providing such a delicious smorgasbord of music all weekend long. I had a wonderful time."