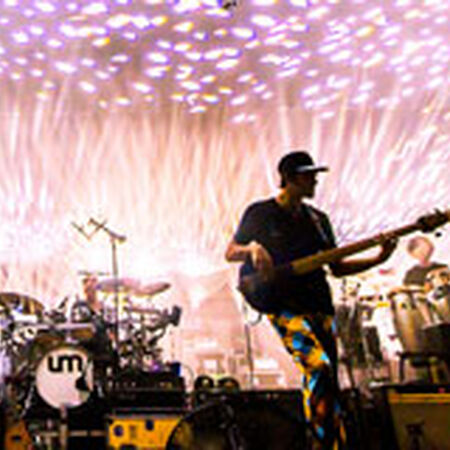 "My 10th UM show and 23rd Birthday. It was hot as balls... My previous show was Peoria this past July. The venue was located in one of the more upscale suburbs of St. Louis. The lot scene was as always for UM shows. The occasional crew hangin out by their vehicle lighting a j and chugging Budweiser trying to catch a buzz before entering the venue and paying to drink what we found were $6 12oz bud cans. Thats worse than the $9 Livenation bud tallboys. (didnt end up drinking much due to this and the overwhelming hot and sticky humid air) STS9 sucked... Too repetitive. They all sounded much better when they put down the guitars and all played keyboards... UM has been burying STS9 this whole #stump tour. I can see why people dig the tribe but it's just not my cup of tea. I got very bored. Thank god UM had the headlining spot that night. I would of left after hearing them had they of been first. Not to also mention, but Waful lit up the night. You and Kuroda are second to none in the lighting game. I was glad to hear a 2nd self opener. Im always in a good mood when things start out like that. Wappy and Higgins were huge jams tonight. Couldn't believe we were 45 mins in after that point! Room to Breathe was another highlight to the night. Hadn't seen that one since Canopy 2012. Good to hear a Can't You See as well! Jake always tears that one up! To top it all off getting to see my first Partyin Peeps end the show was my favorite part of the night. That was the song when UM finally clicked for me back in 09! Great birthday show all in all. Thank you UM for doing all that you do!"