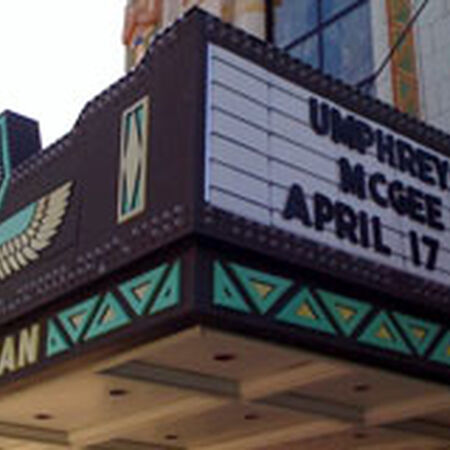 Tribute to the Spinal Shaft 887

"Probably the weakest show I've seen Umphrey's put on compared to the 6 previous shows I've seen them play, but it was still pretty good. The second set outstaged the first set (as usual), but Der Bluten Kat/Turn and Run were pretty good. Hurt Bird Bath and Water were definitley the highlights of this show, but if you're looking to get a really solid Umphrey's show, check out last year's DeKalb show (4-8-08). Last year's Dekalb show blew this one out of the water. And I agree with the other guy, the encore was disappointing. I hope summercamp 09 is much better than Dekalb 09"

"Fun show! I met jake outside the theater like 20 mins before the show so that was a nice treat. Set I Great opener: DBK>Turn n Run> DBK> #5> DBK. the DBK was a lot a space in it and it was really good. Turn and run was solid, nothing crazy, same with #5. I didn't catch mullet (over) when they were playing it but it was fun. Utopian was great too, awesome jamming. I don't like WWS but it was solid.. joel was cookin'. Set II Tribute! i was wearing this shirt and maybe when i met jaco he got some ideas... just maybe haha. Tribute was really good, strong jamming. GYM (RH) has a good extended jam at the end that goes into HBB also had some cool spacey jamming. H20 was the best it had a beautiful jam at the end. 40s was a lot of fun and had a great ending jam. E: LAME ENCORE! I love Spires but seriously? All in all fun night in DeKalb "