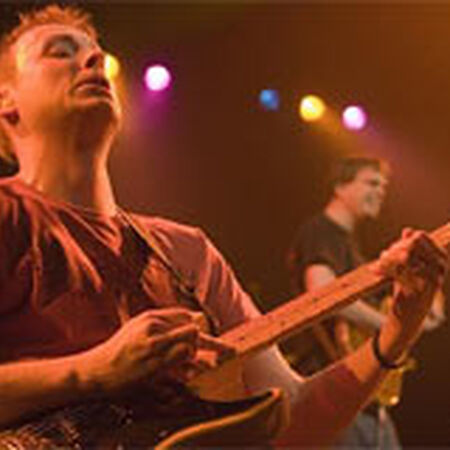 "Outstanding show!!!! I agree with the comments about Jennifer, however it doesn`t take away from the quality of the show. A must have in your collection. Another one to numb your brain!!!!!!!"

"I`ve been getting into Umphrey`s by listening to downloads and studio albums for the last year and a half or so and I really dig what I hear. This was my first show and what a show it was. These guys are rediculously good. The duel guitar attack is among the greatest. The first set of this show was so amped I had goose bumps running down my spine. The Mulche`s set ender was insane. The second set was awesome too excluding vocals on Sweet Child. I just love Bridgeless!! I only hop this friday (4/13/07) night`s show at the Nokia is as rediculous!! I can`t wait!!"

"This is a fantastic show that would be a really great beginning to end listen if Jennifer Hartswick hadn`t shit all over Sweet Child O Mine, which is ironic, because, as I understand, she selected the song. The first set is a shredfest, with HBB opening into a killer JS and Resolution, ending in an, as usual, really high energy Mulches. The second doesn`t disappoint with my new favorite bookmark version of Bridgeless (it keeps rotating around), a great Triple Wide with Jake on acoustic. It`s just a great set that concludes back into Bridgeless. I even like the Band on the Run. The other versions I`ve got have Joel being sketchy on vocals, but this one is pretty solid and they really rock out the end portion of the song. I loved Jen with Trey in 2002-2003 - she`s an amazing horn player and did great back up vocals on that tour. Since then I have heard her sit in with Umphreys (Burlington 2005 and 2006, and this show), I`ve heard her with ARU and some other bands and every time she tries to sing something waaaay beyond her range and she sucks it up. I realize this is just one song and I`m not trying to make it more important than it is, but her vocals on this are just horrible, she`s out of key half the time and she doesn`t have the kind of control everyone thinks. When yo hear it, you`ll understand....it`s kind of embarrassing."

" The whole Nokia weekend was pure magic! I thought they had truly outdone themselves in Atlanta a couple weeks ago, and they had. But Nokia was every bit as amazing. How they manage to sound so fresh every night will become a thing of musical legend. These boys are just hitting their stride. Look out for UM in `07!! "

"After being an avid Umphreys fan and going to many shows....i must say this show happens to be by far one of their best shows. The energy of this show is unbeleivable, the setlist was great, and the jams are incredible. I would deffinatly reccomend this show...its deffinalty worth the 10 bucks! "