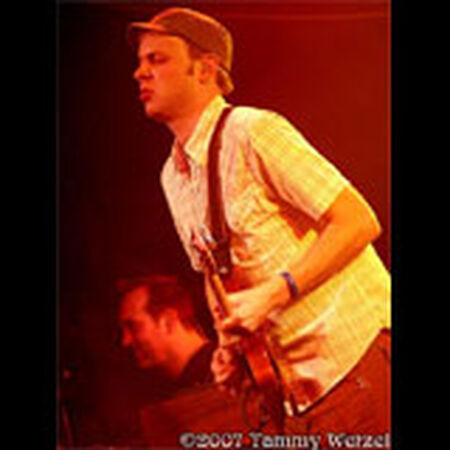 "This show was unbelievable. Only my third Umphrey`s (bonnaroo `06, Burlington 9/30/06) show but dare I say this rivaled any Phish show I ever attended? I am not comparing these bands in anyway but man I had so much fun. There is so much energy at their shows, on stage and in the crowd. I only wish Umphreaks could chill out a little bit and not be in my face so much. Keep your cell phone camera`s down and concentrate on the inevitable sick nasty work of the Umphs! It was well worth the 5 hour blizzard I drove through and well worth a $10 download. "

"One of the top 5 of the year so far and it`s not on the archive, so it`s well worth downloading. It kicked off with Ringo > GA > Ringo. Ringo included 3 separate improv segments with the Joel taking the last segment into Great American. GA had a jam in the middle that began slow and built into a more agressive jam before smoothly transitioning into the end of GA. GA then segued into the end of Ringo. That opening 30 minutes is worth the purchase. The jamming has a real hypnotic feel to it. To close out the set, Got Your Milk > Visions of Parin > August > Song Remains the Same. Visions, as always, had a bad ass jam out of it. The jam definitely has a tease or two other than roundabout, but I can`t put my finger on it. The segue out of Visions was a ->, which umph doesn`t do too often (twice in this show). August has a lyrical stew within that is worth downloading. Then, set closed with a Zep cover. KILLER 1st set! 2nd set didn`t disappoint either. Highlights were Uncle Wally > Sunglasses jam and the segue into Plunger, which was the most unique umph segue I`ve heard to date. I`ll leave the review at that. One of the best shows this year and it`s not on the archive. Why this isn`t the most purchased from the north east run confuses me greatly. "

"This was my second time seeing umphrey`s since their moe.down performance last year. Since then, um has taken up about 95% what I`ve listened to. I can`t help it. They never cease to amaze me with every new show I get. Needless to say, I was super-pumped to see them in Rochester. The jams throughout this whole show were tight, flowed very well, and were full of emotion. More improv over a basic chord structure than the progression they`re so known for, and I loved every minute of it. The August with `Jimmy Stewart` is a great example of this. This is a realm of umphrey`s that is becoming a bigger part of their forte, more flow and feeling to certain jams...rather than the constant tinkering and picking of each others brains that usually goes on...which I love as well. Shit, thats what makes umphrey`s umphrey`s. But as the comfort level rises, and the vulnerability of improv is constant....the sky is the limit. The Jimmy Stewart phenom is thank for this... as well as their constant hunger to challenge themselves and test the limits..which I guess go hand in hand. We are lucky folks to experience the musical prowess and happiness they provide. Other notables from this show-Great American, Glory, Uncle Wally and the Blue Echo/Tomorrow Never Knows sangwich \iiiii/"

"This is my fourth UM show. I was first turned on by them at Bonnaroo `06. That was my first time ever hearing them, and was instantly hooked. I`m constantly looking for good music, with more than just simple harmony and rhythm. These guys are certainly that and more. Anyway, about the Rochester show. First off, the venue is not large. While a great music hall, it probably can`t hold more than 1000 folks. My first thought was that Umphreys probably wouldn`t take this venue as seriously as the larger ones they play. I was anticipating the set list to be a "cock-rockish" selection (meaning more of a bar-rock sound than magical). My anticipations were completely wrong. It wasn`t about the venue this night, it was about the fans. Every single person in that place was Umphrey crazy! The band definately knew it. They played 2 basically non-stop sets. Tons of energy and new song material (aka improv) were present. The set list was so cool. We had the pleasure of sick versions of Glory, Zeppelin`s Song Remains the Same, Great American, Pay the Snuka, and Got Your Milk. All very awesome songs, and they were played very well with tons of improvisation. Jake and Brendan are like one when they play. Those two are too good at playing together. Kris Meyers was off the hook for this show! During Song remains the same, I nearly soiled myself when listening to Myers. This was a great show and good memory. Thanks to UM! I give it a 8.5/10. For anyone new to the band, buy the Bonnaroo `06 show. It`s a perfect 10. See you UMFREAKS at the shows..."