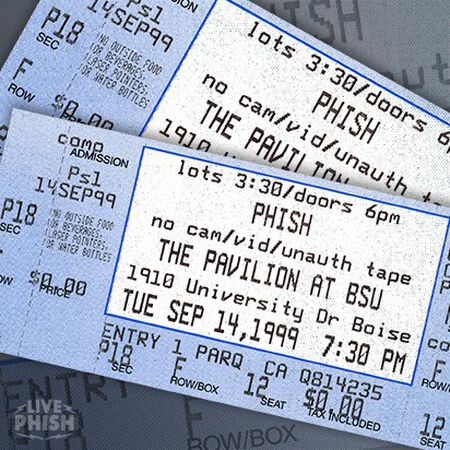 Phish kicked off their fall 1999 tour in Vancouver, followed by a two-night stand at The Gorge and a Sunday show in Portland.  The tour then turned toward the Sawtooths for a Tuesday night show at Boise State University before continuing in California and beyond.  The BSU Pavilion was opened in 1982 as the Boise State Broncos' basketball arena with a concert capacity of about 13.000.  Tickets for Phish cost $26.50 with a GA floor and reserved seating in the stands.  This was the band's second show at this venue (they had opened summer 1995 there) and their last show to-date in Idaho.  Given the days off on both sides, the seven hour drive from Portland and the ten-plus hour drive to Shoreline for the next shows, many opted to skip this gig but those who took the trip were justly rewarded and those who didn’t will never forget it.

Boise's Set I kicked off with Chalk Dust Torture and featured The Curtain, Waste, a dramatic sequence of Loving Cup, What’s The Use? and Wading In The Velvet Sea, Farmhouse, and a hot Taste.  The mostly non-stop set II began with the first Peaches en Regalia in more than two years, followed by an AC/DC Bag for the ages.  This Bag was a tour de force of multi-modal improvisation culminating in a psychedelic freakout so far Out that swirling vacuum ambiance was the only way to wrap it.  The Boise Bag spilled over into a standout Gumbo with a slow funk Another One Bites The Dust jam that cemented Boise’s snooze-you-lose status.  A frenetic Down With Disease, Frankenstein (with a nod to Pink Floyd) capped the set.  The encore was Simple with a live fade-out that gave the band time to move downstage for an A cappella Hello My Baby to close out a magical night at BSU.

Wading in the Velvet Sea 382