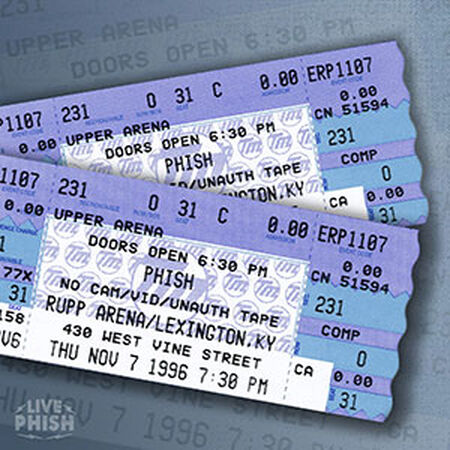 On November 7, 1996 Phish played their only show to-date at Rupp Arena in downtown Lexington, KY - best known as the home of University of Kentucky Wildcats basketball.  Opened in 1976 with a capacity of 23,500 and named for former UK Coach Adolph Rupp, the venue was dubbed "the largest sporting arena in the country."  Phish rolled into Cats country just three shows after their Halloween Remain in Light show and midway into a 35-date national tour.  The band's sixth studio album, Billy Breathes, was released October 16th.  Fall tour started that same day and was heating up on the heels of multiple guest drums and percussion appearances by The Fringe/Surrender to the Air's Bob Gullotti and Santana's Karl Perazzo. The band built upon that energy with driving beats, heavy keys and Trey's percussion setup to propel the music into a new groove-driven amalgam, foreshadowing what was eventually called cow funk.  A Live One had been out for more than a year, but multitrack tapes were still spinning to capture the magic at Rupp Arena - where more than 10,000 UK students and Phishheads got far beyond their $20 worth of vast jams, deep exploration and rarities.

Rupp Arena set I highlights included a Chalk Dust Torture opener, the only Weigh of fall tour and a hot Stash.  Waste and the tour's first Guyute came next, followed by a Free, Tela combination that featured the Billy Breathes hit single paired with fall’s only Tela.  An incendiary Character Zero closed the set.  The Rupp's set II kicked off with a Suzy Greenberg opener that set up the experimental, top-shelf (longest-ever at the time) Bathtub Gin.  The Rupp Gin was a masterpiece that showcased a multiverse of creativity capped with a warped outro that melted right into Hold Your Head Up.  After Bathtub Gin, HYHU, Fish emerged from behind his kit with his Electrolux vacuum for the only Bike of fall tour.  A monumental You Enjoy Myself ended set II and alluded to the Frankenstein encore which put the exclamation point on one of the great sets of fall '96.

11/7/96 was recorded by Paul Languedoc to digital multitrack and mixed and mastered by Jon Altschiller.  The show is available 3/7/16 via: the LivePhish+ App and as MP3, FLAC, and full-resolution FLAC-HD downloads at LivePhish.com.