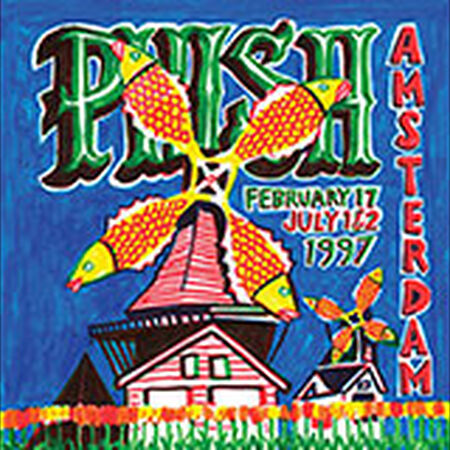 Wading in the Velvet Sea 495

Brand new eight-CD box set featuring three complete shows (February 17, July 1-2) recorded live at Paradiso in the Netherlands in 1997. The shows have been fully mixed and mastered from the band's multitracks.

On February 17, 1997 Phish first played Paradiso, a converted former church turned rock-club/cultural center with a capacity of about 1500. Over the next four months, Phish logged three breakthrough shows at this historic venue where the intimate setting pushed the music to new heights again and again.

From the Soul Shakedown party opener and fluid, psychedelic improvisation-clinic-of-a-set II (Down With Disease > Carini > Taste > Down With Disease) on 2/17/97 to the "back of the worm" Ghost opener, Reba and another peak transcendent Set II [Fish Keyboard Jam > Timber (Jerry) > Bathtub Gin > Cities] on 7/1/97 through the Mike's Groove Sandwich and must-hear Stash > Llama > Wormtown Jam plus the double encore of 7/2/97, these three shows spread over 8 CD's comprise some of the most experimental music Phish ever played. The three shows on the Amsterdam box, the only Phish shows to-date at Paradiso, combine to deliver the full impact of a shared peak experience in an exotic locale seamlessly integrated and sizzling with creative intensity.