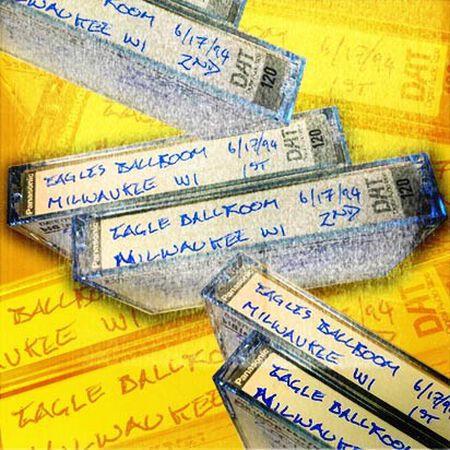 On June 17, 1994 Phish played the Eagles Ballroom in Milwaukee, Wisconsin, the largest and most ornate room in The Rave/Eagles Club complex.  The landmark “Million Dollar Ballroom” was opened in 1927 with an oval wooden dance floor and domed ceiling ringed by balconies, with a capacity of about 1,500.  It was Phish’s only show in the haunted ballroom but their second performance in the building, having played The Rave in spring 1992.  This was the “O.J. Show” performed during O.J. Simpson’s slow-speed Bronco chase.  Starting just before showtime and unbeknownst to the audience (O.J. had a cell phone in 1994 but most fans didn’t), the band was following O.J.’s progress along the freeways of Los Angeles.  To say this affected the show would be an understatement.  Phish channelled that crazy American energy and injected the juice into the music. The result is no secret – the O.J. Show is a classic introductory Phish tape.

Highlights from 6/17/94 set I included the Runaway Jim opener dedicated to O.J., a dynamic Foam, Split Open And Melt, and Punch You In The Eye > Bathtub Gin.  All of set II was a highlight, a Peak Phish excursion at the height of summer 1994, wound into a historic soundtrack.  The band thrice showcased their latest song, Simple, during set II: in its usual slot out of Mike’s Song, a unique mashup with I Am Hydrogen, and within the Harpua narration.  Harpua also featured the band’s attempt to cool down the sweltering audience, and Gamehendge references foreshadowing events of the next few weeks.

The verdict on the O.J. Show is unanimous - this is must-hear Phish. 6/17/94 Milwaukee was recorded by Paul Languedoc to 2-track soundboard DAT and mastered by Fred Kevorkian.