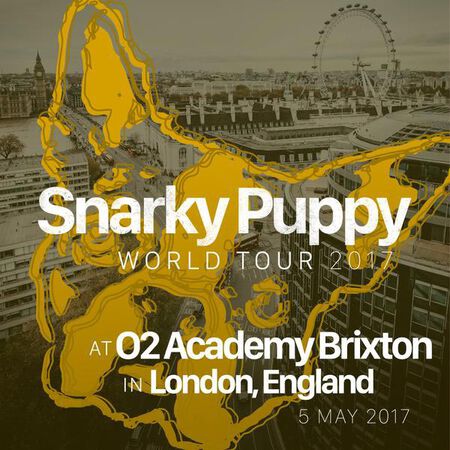 Sold-out show for 5,000 at the legendary Brixton Academy. It’s the band’s largest non-festival gig to date. The vibe is electric from the first note. Beep Box eases the set in with a flugelhorn solo from Maz over a slinky, fluid outro groove. Grown Folks is laid-back and groovy. Bob takes his time with a tenor solo and McQueen plays over the outro vamp. Bill keeps the energy up with a percussive intro to a funky Ready Wednesday (thanks to Larnell). Justin works the Minimoog on the solo section. After a longer, more etherial outro than normal, things pick back up with Tarova. Maz takes an effected solo, then goes duo with Larnell amidst improvised full-band hits. Marcelo develops rhythmic motifs on djembe for a solo over the outro vamp. The band sits in the solo section on Palermo for a while with Bullock on top of it. Marcelo stretches on the outro while the crowd holds it down with the chacarera clapping pattern. Justin takes the lead on Thing of Gold. Bob plays over the bridge. Big Ugly is slow and powerful. McQueen takes both solos. What About Me? goes as usual until after the chorus. The band smoothly transitions into Phenomenal Woman, joined by Laura Mvula on lead vocals and Becca Stevens backing. Bill takes a clav break. The tune ends, then launches right back into the drum solo for What About Me? You can hear Larnell slowly taking off his sweater and watch while the crowd eggs him on. Funny stuff. Lingus gets a cameo from English wunderkind Jacob Collier, who attacks Bill’s keyboard station like a kid in a playground. Very special energy throughout this one. Helluva night.