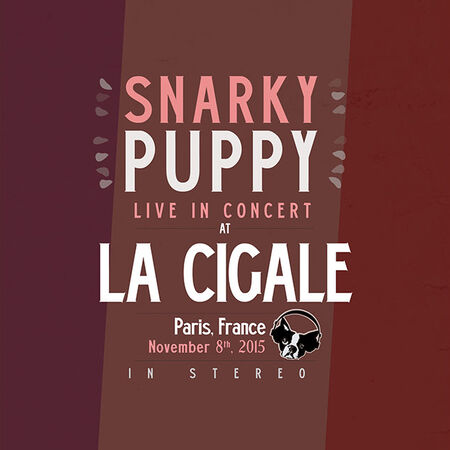 
Helluva crowd, helluva gig. Bill, Justin, and Nate kick off Whitecap with a funky staccato keyboards. The theme continues throughout. Serious vibe on the breakdown. Bill bops on Rhodes. The band flips old tune Celebrity as a New Orleans second-line. Maz gets in on trumpet. Justin sings on trumpet during Kite. Michael takes a spacious bass solo on the outro. Outlier rocks. Bullock and JT get into some beautiful interactions in the middle. The band drops Ø for its French debut. Bob rocks the octave fuzz and whammy on the first solo. Bill phrases his butt off on Rhodes. Justin takes it home on lead synth. Michael brings in Binky dub-style with JT and Nate. The crowd claps an accompaniment in 7/4 and 6/4 for Bullock’s solo. The outro goes Busta. Nate gets melodic on cowbells to bring in Tio Macaco. The band ditches the original groove and gets in it. Nate and JT do some mind-reading on the solo section. Justin brings things home with a beautifully-woven string of notes on Sleeper.  The band plays a heavy-handed Shofukan and Justin floats beautifully over the top of it on trumpet. Nate and JT take it out with a serious groove in the last minute of the show. Beautiful night.

"I was there in the audience for a pretty hot show in Paris. Snarky Puppy's music in all its powerful amazingness, with unexpected variations of our favorite tunes. Great sprit on stage and in the audience. Note to the engineer: I can barely hear the bass in the mix... I'm a sad bassist."