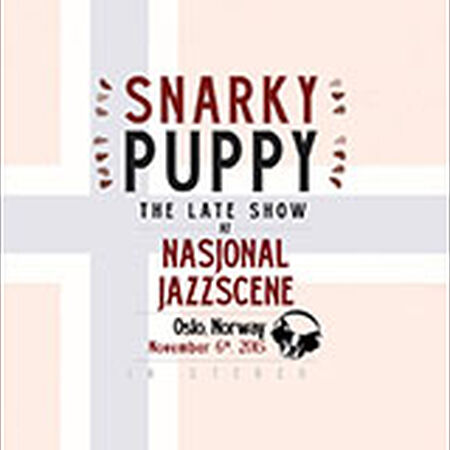 First of four shows at the intimate Norway club Nasjonal Jazz Scene. Great vibe for all four of them. The band really sounds at home back in a small club. Nate kicks off a very brisk Strawman on congas. Justin gets playful on synth. Bob gets bendy. Maz takes Kite on flugelhorn. Michael takes the outro on bass. Bullock gets weird on Outlier. Feedback and half-time bop. JT eats it right up. GØ is slower and groovy. Bob rocks some fuzz on the first solo. Bill grooves the bridge on Rhodes and Justin takes the outro on Moog. The crowd brings in Tio Macaco with claps. Nate and JT get flexible with the feel on the extended percussion solo. Young Stuff is slow and funky. Bullock takes the bridge. Bill takes the outro for the first time on the crazy Roli Seaboard keyboard. Bob, Justin, and JT mix it up on the solo section to What About Me? and JT stretches on the outro. The band encores with Sleeper and Justin takes it home on Moog. One down, three to go.