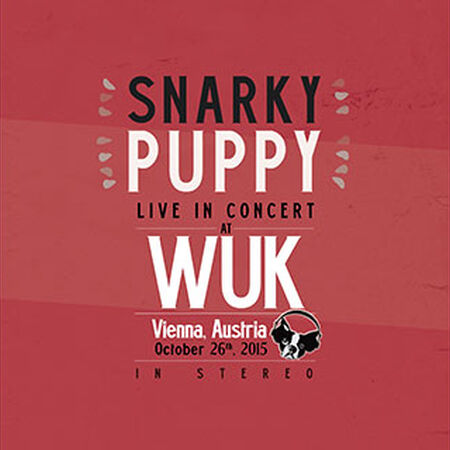 
Only Austrian show of the tour. Great crowd, great vibe, lots of new things happening on stage. Whitecap is grooving. Maz takes the first solo of the night on flugelhorn. Skate U goes Bobby Caldwell. Justin phrases through it on Moog. Bullock gets nasty on the outro with some pedals. Bent Nails is fast and funky. Bill takes the first one. Maz and Justin trade on trumpet over the outro. Ø is funky. Bob goes nuts with Fuzz Factory. Michael works the envelope phaser on a bass solo over the bridge and Justin sings on Moog to take things out. Bullock takes the solo on a slow, groovy 34 Klezma. Maz plays over the bridge in Thing of Gold and Justin phrases beautifully on Moog. Nate and JT crank the tempo up on Tio Macaco. Bob rocks on Young Stuff. Michael, Bill, and JT get into a rhythmic conversation on the outro. Shofukan grooves. Justin owns on trumpet. Bill sets up Ready Wednesday for the first encore. The solo section gets super funky with an understated house groove. Bill plays over it on Roli, then moves to piano. For the second encore, Bob dials up a crazy tone on What About Me? and goes in with JT. JT shuts it down on the drum solo. Lots of great grooves and moments throughout, and a bunch energy from the audience.