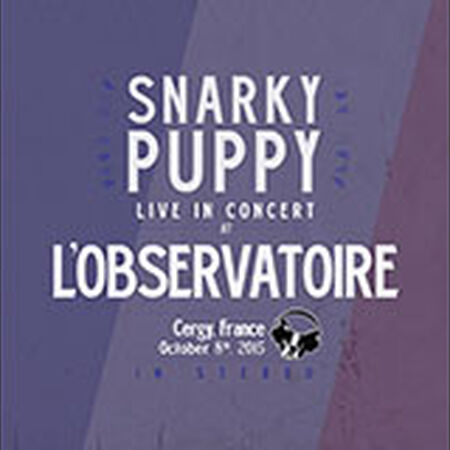 First gig of the French run. Show eases in gently with Intelligent Design for its first appearance of the tour. Loose but playful. Maz takes a solo on muted trumpet and Mark picks it up from there. Nate and Sput get crazy on the vamp. Cory sets up a Skate U remix. Michael takes a bass solo goaded by Bill and Sput throughout. Cory takes his time on the next vamp and Marks gets funky over the outro. Justin brings in Whitecap 70’s science documentary-style and Cory goes all over the map with a reharmonization later in the tune. Bullock and Cory play over Kite, which ends up uncharacteristically explosive. Bill owns the solo on What About Me? starting contemplatively on Rhodes and then getting extremely percussive on synth with the help of Justin on Moog bass. The band changes directions and improvises new hits under Bill, then going straight out into Sput’s solo. Michael, Sput, and Nate toy with the intro the Quarter Master, which is the highlight of the night. The solo section breaks down to keys and guitar and things gets funky. Justin rides over the top of it on trumpet. Serious groove when the band re-enters. More simmering and funky keyboard playing. Lots of messing around, led by Cory on Moog bass. Super funky. More improvised grooves. Bill sets up Ready Wednesday on Rhodes and synth pads. Really tight and funky when the band enters. Some silliness with the crowd for the encore, then Lingus. Egged by crowd claps, Cory starts dark and aggressive and takes it through the roof. A messy gig overall, but loads of great moments and exploration.