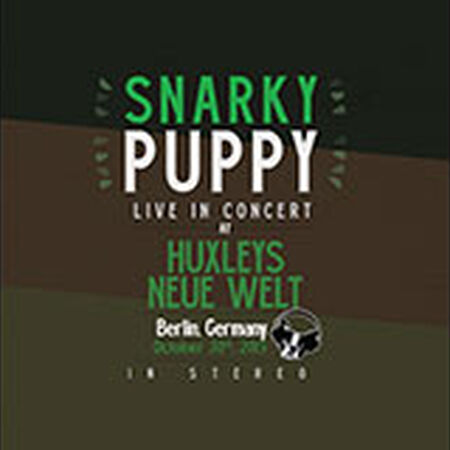 Very cool set in the German capital. Nate starts it off with a melodic conga intro to Binky. Bob rocks the first solo. Maz starts things off clean then moves to the wah. The outro goes Jaco. Justin phrases over Flood and JT swings. Bullock wails over the first solo section in Kite and Bill reins it in on a beautiful outro. JT sets Bob up with a serious groove on What About Me? and Bob runs with it. The amp sounds like it’s about to combust. Justin gets syncopated with the outro and JT thrashes through it. Maz and Justin phrase through Thing of Gold. Tio Macaco is quick and funky. Nate and JT talk on the extended percussion duo. Bill sets up a slower, funkier Ready Wednesday with a piano intro, then moves to Roli for the solo. The band encores with Shofukan. Justin develops some beautiful melodic ideas on trumpet. Nate and JT go ham on the outro. The crowd brings the band back out with the hook from Shofukan. JT takes it and goes drum-n-bass. It morphs into Quarter Master. Michael stretches the time and the band goes shuffle. Maz grabs the mic and drops some JB. Bill gets funky on Rhodes and the band takes it out. Messy but really fun.