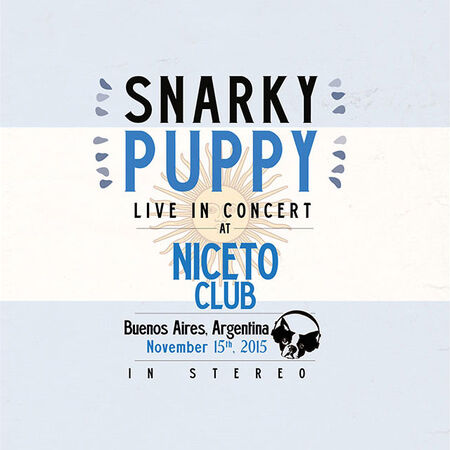 A much-anticipated gig for the band. Marcelo’s hometown show. Crowd is turned up from the beginning. Things ease in with Flood. It’s fast. Justin burns through it with a long synth solo. Jamison gets atmospheric and then takes things over the top. Skate U hints at go-go. Shaun gets churchy on organ and Bullocks goes dirty on the outro. The crowd rocks some palmas for Bill’s intro on 34 Klezma. Kite has loads of vibe. Maz phrases over the first vamp. Michael takes the outro solo on bass, starting slow and spacious before developing into longer swinging lines. The set picks right back up with a rock-heavy What About Me? The crowd almost drowns out the band on the chorus melody. Mark moves from a clean-toned rhythmic approach to a driven chordal build. Jamison eats it up. He gets into inner rhythms on the outro solo. Shaun gets the crowd to belt out Thing of Gold. Justin takes a warm trumpet solo on the bridge. Shaun detunes an oscillator and gets weird on the main solo section before prompting the crowd to sing “Happy Birthday” to Mike Harrison, the front of house sound engineer. Marcelo gets some shine at the top of Tio Macaco on pandeiro. The crowd drowns out the horns on the melody entrance. Jamison and Marcelo run through duple and triple meters in a beautiful percussion exchange. The crowd chants “Marcelo!” Hilarious. Mark goes right into Shofukan. Lots of hype. Justin calms things down with a lyrical solo on trumpet. Jamison and Marcelo take it out. The band plays Lingus for the encore and the crowd provides vocal accompaniment throughout. Bill takes the whole solo on piano, working up from legato lines to rhythmic chordal stabs. He finishes it out on synth. The crowd sings the horn solis! For the second encore, Shaun owns Sleeper with Argentinian vocal assistance. He takes it all the way up. Amazing energy throughout.