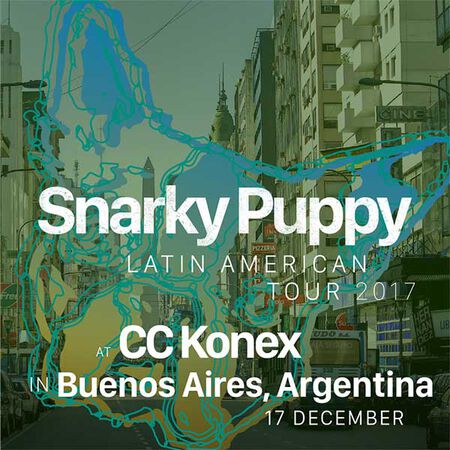 The first of two nights in Buenos Aires. A beautiful open-air venue for 2,200 in a cultural complex. Flood warms things up with solos from Justin and JT. Marcelo and JT take it for a moment at the end. Semente gets a flugelhorn solo from Maz. Bill takes the first solo on Grown Folks and Shaun turn things up on Moog for the ending. Outlier makes its first recorded appearance on the tour. Bullock and JT joust it out in the solo section, playing with related meters. Justin takes the bridge on Thing of Gold and Shaun brings it home. An old friend of Marcelo’s, drummer Nicolas Arroyo of supporting act Duratierra, joins the band on congas for Palermo. Bob takes the solo on guitar. Nicolas and Marcelo get into some deep rhythmic interplay on the outro. Shaun brings down the house with Sleeper for the encore. The band returns for a second one in a time crunch before curfew. Quarter Master shows up for the first time. Bill takes one on Rhodes. The band can’t let it go and shouts.