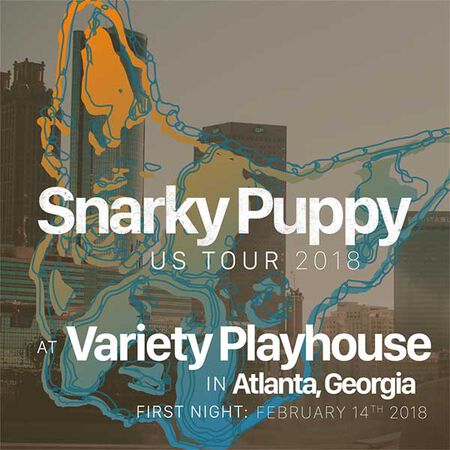 First show of the tour post-festival. FORQ opening. The evening eases in with Flood. Justin takes a solo on Prophet and Jamison picks it up from there. He and Nate get into it just before the outro. Bill takes a long one on piano during Semente. Shark Tank makes its first appearance in years, with Mark soloing over the end. It’s sloppy, but fun. Beep Box gets a guest appearance from my favorite emcee, Mama Sol, a Flint native who recently moved to Atlanta. Shaun hypes up the crowd on Thing of Gold. Maz takes the bridge on trumpet and drops a P-Funk quote. Shaun takes it out on solo organ and weaves into Young Stuff. What About Me? goes to new places with Justin on Prophet during the solo section. Jamison crushes the outro. Shaun takes it home on talkbox with Sleeper. The band encores with Mark’s tune Jefe, played for the first or second time ever live. As with most tour-opening shows, this one was rough around the edges but had a good energy.